What you’ll learn to do: describe common management and leadership styles, and identify the circumstances under which they are most effective

In this section you’ll learn about common management and leadership styles and when they’re most effective. 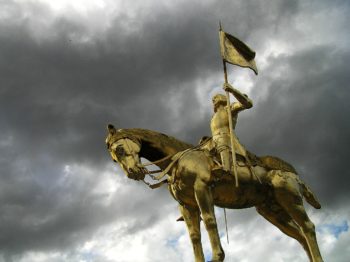 Regardless of their position within an organization, managers need to act as leaders. Some people think leadership means guiding others to complete a particular task, while others believe it means motivating the members of your team to be their best selves. Whatever the differences in emphasis or wording, the following is probably a fair definition: Leaders are people who know how to achieve goals and inspire people along the way.[1] In a business setting, leadership also means being able to share a clear vision of where the company is heading while providing the knowledge, information, and methods needed to get there.

A manager can take a number of different approaches to leading and overseeing an organization. A manager’s style of giving direction, setting strategy, and motivating people is the result of his or her personality, values, training, and experience. Let’s examine some of the most common management styles and the circumstances under which each is most appropriate.

Under an autocratic management style, decision-making power is concentrated in the manager. Autocratic managers don’t entertain any suggestions or consider initiatives from subordinates. This style of management is effective for quick decision making but is generally not successful in fostering employee engagement or maintaining worker satisfaction. When do managers tend to use this style?

The laissez-faire style is sometimes described as “hands-off” management because the manager delegates the tasks to the followers while providing little or no direction. If the laissez-faire manager withdraws too much, it can sometimes result in a lack of productivity, cohesion, and satisfaction. Under this type of management, subordinates are given a free hand in deciding their own policies and methods.When do managers employ this approach?

Under a participative or democratic style of management, the manager shares the decision-making authority with group members. This approach values individual interests and perspectives while also contributing to team cohesion. Participative management can help employees feel more invested in decisions, outcomes, or the choices they’ve made, because they have a say in them. When is this an appropriate managerial choice?

Each style of management can be effective if matched with the needs of the situation and used by a skilled, versatile manager. The best managers are adept at several styles and able to exercise good judgement about which one is suited to the task at hand.

There was a time when the role of a manager and a leader could be separated. A foreman in a shoe factory during the early 1900s didn’t give much thought to what he was producing or to the people who were producing it. His or her job was to follow orders given to him by a superior, organize the work, assign the right people to the tasks, coordinate the results, and ensure the job got done as ordered. The focus was on efficiency.

In the new economy, however, where value increasingly comes from knowledge—as opposed to skill—and where workers are no longer undifferentiated cogs in an industrial machine, management and leadership are not easily separated. People look to their managers not just to assign them a task but to articulate a purpose, too. Managers are expected to organize workers not just as a means of maximizing efficiency but to nurture abilities, develop talent, and inspire results.

The late management guru Peter Drucker was one of the first to recognize this shift in the roles and relationships of managers and employees. He identified the emergence of the “knowledge worker” and the profound impact that would have on the way business is organized. With the rise of the knowledge worker, “one does not ‘manage’ people,” Drucker wrote. “The task is to lead people. And the goal is to make productive the specific strengths and knowledge of every individual.”[2]

With Drucker’s idea of “leading people” in mind, let’s examine the types of leaders most commonly encountered in business. Keep in mind that the management styles described above are not separate from leadership, but rather are another dimension to the manager as an individual. Managers don’t put on an autocratic manager hat one day and a transformational leader hat the next. Instead, every individual fulfilling a managerial role within an organization must be able to adapt his or her style to the situation at hand. This adds considerable complexity to the role of a manager and is one of the reasons that a manager may leave a company—it just wasn’t a good “fit.” A poor fit may be the result of a tug-of-war between management styles, personality, and leadership qualities.

Transformational leaders work with subordinates to identify needed change, create and share an inspiring vision, and bring about change together with committed members of a group. Transformational leadership serves to enhance the motivation, morale, and job performance of followers through a variety of mechanisms. These include connecting the follower’s sense of identity and self to a project and to the collective identity of the organization; being a role model for followers in order to inspire them and to raise their interest in the project; challenging followers to take greater ownership for their work; and understanding the strengths and weaknesses of followers, allowing the leader to align followers with tasks that enhance their performance. Transformational leaders are often idealized and viewed as moral exemplars for their contributions to a team, an organization, or a community.

Transactional leadership was first described by Max Weber in 1947 and later by Bernard Bass in 1981. This kind of leadership, also known as managerial leadership, focuses on supervision, organization, and performance. Unlike transformational leaders, those using the transactional approach are not looking to change the future—they value the status quo. Transactional leaders pay attention to their followers’ work in order to find fault or deviation and gain their compliance through a system of rewards and punishments. There are two factors that form the basis for this reward/punishment system: contingent reward and management by exception. Contingent reward provides rewards (material or psychological) for effort and recognizes good performance. Management by exception allows the leader to maintain the status quo; the leader intervenes when subordinates do not meet acceptable performance levels and initiates corrective action to improve performance.

Narcissistic leaders are known for being interested only in themselves, at the expense of others, such as employees or group members. The leader’s narcissism may be healthy or destructive, although there is a continuum in between. To critics, the narcissistic leader—especially one with destructive narcissism—is driven by unyielding arrogance, self-absorption, and a personal egotistic need for power and admiration. A study published in Personality and Social Psychology Bulletin suggests that when a group is without a leader, a narcissist often takes charge; researchers found that people who score high in narcissism tend to take control of leaderless groups. Freud considered “the narcissistic type . . . especially suited to act as a support for others, to take on the role of leaders and to . . . impress others as being ‘personalities’.”

In reality, leaders come in as many flavors as ice cream. There are many more types than the three described above. Some leaders are directing; others are more relaxed—acting more like a coach than a boss. Leaders might not lead with the same style all the time, either. There are occasions when managers must take a firm stand, making critical decisions on their own, and other times when they work with their employees to build a consensus before acting. Each style has its place and time, and each manager has his or her own preferred approach. Consider the CEO of Japan Airlines profiled in the following video and what his actions say about his management and leadership style.