Suppose the United States fixes its exchange rate to the British pound at the rate \(Ē_{$/£}\). This is indicated in Figure 12.2.1 as a horizontal line drawn at \(Ē_{$/£}\). Suppose also that the economy is originally at a superequilibrium shown as point F with original gross national product (GNP) level \(Y^{1}\). Next, suppose the U.S. central bank (the Fed) decides to expand the money supply by conducting an open market operation, ceteris paribus. Ceteris paribus means that all other exogenous variables are assumed to remain at their original values. A purchase of Treasury bonds by the Fed will lead to an increase in the dollar money supply. As shown in Chapter 9 "The AA-DD Model", Section 9.5 "Shifting the AA Curve", money supply changes cause a shift in the AA curve. More specifically, an increase in the money supply will cause AA to shift upward (i.e., \(↑M^{S}\) is an AA up-shifter). This is depicted in the diagram as a shift from the red AA to the blue A′A′ line. 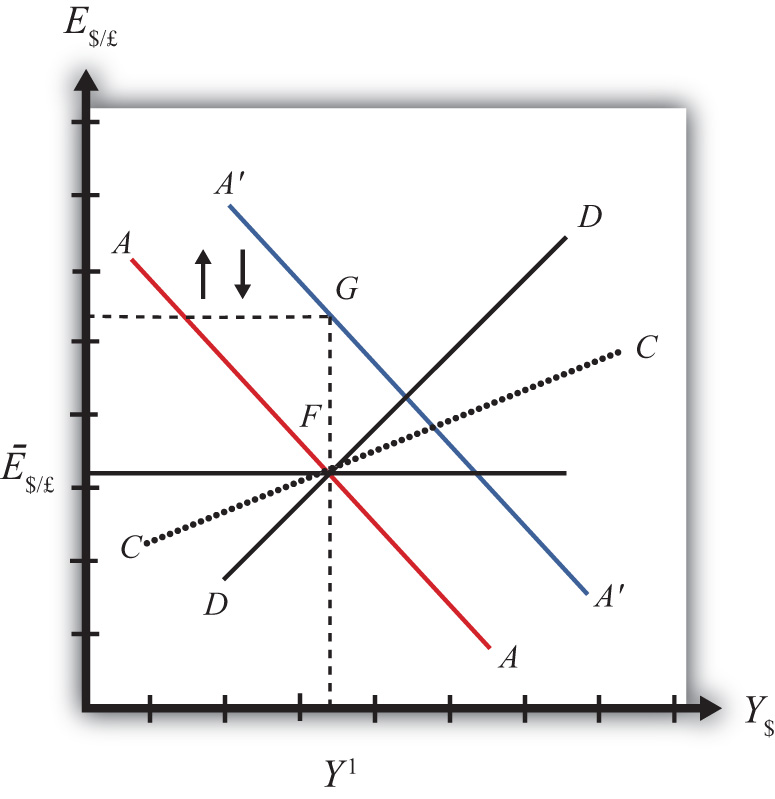 The money supply increase puts upward pressure on the exchange rate in the following way. First, a money supply increase causes a reduction in U.S. interest rates. This in turn reduces the rate of return on U.S. assets below the rate of return on similar assets in Britain. Thus international investors will begin to demand more pounds in exchange for dollars on the private Forex to take advantage of the relatively higher \(R_{0}R\) of British assets. In a floating exchange system, excess demand for pounds would cause the pound to appreciate and the dollar to depreciate. In other words, the exchange rate \(E_{$/£}\) would rise. In the diagram, this would correspond to a movement to the new A′A′ curve at point G.

However, because the country maintains a fixed exchange rate, excess demand for pounds on the private Forex will automatically be relieved by Fed intervention. The Fed will supply the excess pounds demanded by selling reserves of pounds in exchange for dollars at the fixed exchange rate. As we showed in Chapter 10 "Policy Effects with Floating Exchange Rates", Section 10.5 "Foreign Exchange Interventions with Floating Exchange Rates", Fed sales of foreign currency result in a reduction in the U.S. money supply. This is because when the Fed buys dollars in the private Forex, it is taking those dollars out of circulation and thus out of the money supply. Since a reduction of the money supply causes AA to shift back down, the final effect will be that the AA curve returns to its original position. This is shown as the up and down movement of the AA curve in the diagram. The final equilibrium is the same as the original at point F.

Thus after final adjustment occurs, there are no effects from expansionary monetary policy in a fixed exchange rate system. The exchange rate will not change and there will be no effect on equilibrium GNP. Also, since the economy returns to the original equilibrium, there is also no effect on the current account balance.

Contractionary monetary policy corresponds to a decrease in the money supply or a Fed sale of Treasury bonds on the open bond market. In the AA-DD model, a decrease in the money supply shifts the AA curve downward. The effects will be the opposite of those described above for expansionary monetary policy. A complete description is left for the reader as an exercise.

The quick effects, however, are as follows. U.S. contractionary monetary policy with a fixed exchange rate will have no effects within the economy. \(E_{$/£}\), \(Y_{$}\) and the current account balance will all be maintained or return to their initial levels.

One other important comparison worth making is between expansionary monetary policy in a fixed exchange rate system with sterilized foreign exchange (Forex) interventions in a floating system. In the first case, expansionary monetary policy is offset later with a contraction of the money supply caused by automatic Forex intervention. In the second case, Forex intervention leading to an expansion of the money supply is countered with contractionary open market operations. In the first case, the interest rate is maintained to satisfy interest rate parity. In the second case, the interest rate remains fixed by design. Clearly, these two situations represent exactly the same set of actions, though in a different order. Thus it makes sense that the two policies would have the same implications—that is, “no impact” on any of the economic variables.