Why Do Organizations Change? Organizations change in response to changes in their environment. One of the current changes is in the demographics of the workforce.

Organizational change is often a response to changes in the environment. For example, both the United States Department of Labor and Organization for Economic Co-operation and Development (OECD) estimate that the age of the workforce is on the rise (Lerman & Schmidt, 2006). What does this mean for companies? Organizations may realize that as the workforce gets older the types of benefits they prefer may change. Work arrangements such as flexible work hours and job sharing may become more popular as employees remain in the workforce even after retirement. As the workforce rapidly ages, it also becomes possible that employees who are unhappy with their current work situation will choose to retire, resulting in a sudden loss of valuable knowledge and expertise on the part of organizations. Therefore, organizations will have to devise strategies to retain these employees and plan for their retirement. Finally, a critical issue is finding ways of dealing with age-related stereotypes, which act as barriers in the retention of these employees.

Sometimes change is motivated by rapid developments in technology. Moore’s law (a prediction by Gordon Moore, cofounder of Intel Corporation) dictates that the overall complexity of computer circuits will double every 18 months with no increase in cost (Moore’s Law, 2008). Such change is motivating corporations to rapidly change their technology. Sometimes technology produces such profound developments that companies struggle to adapt. A recent example is from the music industry. When CDs were first introduced in the 1980s, they were substantially more appealing than the traditional LPs. Record companies were easily able to double the prices, even though producing CDs cost a fraction of what it cost to produce LPs. For decades, record producing companies benefited from this status quo. Yet when peer-to-peer file sharing through software such as Napster and Kazaa threatened the core of their business, companies in the music industry found themselves completely unprepared for such disruptive technological changes. Their first response was to sue the users of file-sharing software, sometimes even underage kids. They also kept looking for a technology that would make it impossible to copy a CD or DVD, which has yet to emerge. Until Apple Inc.’s iTunes came up with a new way to sell music online, it was doubtful that consumers would ever be willing to pay for music that was otherwise available for free (albeit illegally so). Only time will tell if the industry will be able to adapt itself to the changes forced upon it (Lasica, 2005).

Globalization is another threat and opportunity for organizations, depending on their ability to adapt to it. Organizations are finding that it is often cheaper to produce goods and deliver services in some countries compared to others. This led many companies to utilize manufacturing facilities overseas, with China as a popular destination. For a while, knowledge work was thought to be safe from outsourcing, but now we are also seeing many service operations moved to places with cheaper wages. For example, many companies have outsourced software development to India, with Indian companies such as Wipro Ltd. and Infosys Technologies Ltd. emerging as global giants. Given these changes, understanding how to manage a global workforce is a necessity. Many companies realize that outsourcing forces them to operate in an institutional environment that is radically different from what they are used to at home. Dealing with employee stress resulting from jobs being moved overseas, retraining the workforce, and learning to compete with a global workforce on a global scale are changes companies are trying to come to grips with.

Changes in the market conditions may also create changes as companies struggle to adjust. For example, as of this writing, the airline industry in the United States is undergoing serious changes. Demand for air travel was affected after the September 11 terrorist attacks. Also, the widespread use of the Internet to book plane travels made it possible to compare airline prices much more efficiently and easily, encouraging airlines to compete primarily based on cost. This strategy seems to have backfired when coupled with the dramatic increases in the cost of fuel. As a result, airlines are cutting back on amenities that were taken for granted for decades, such as the price of a ticket including meals, beverages, and checking luggage. Some airlines, such as Delta Air Lines Inc. and Northwest Airlines Inc., have merged to deal with this climate, and talks involving other mergers in this industry continue. 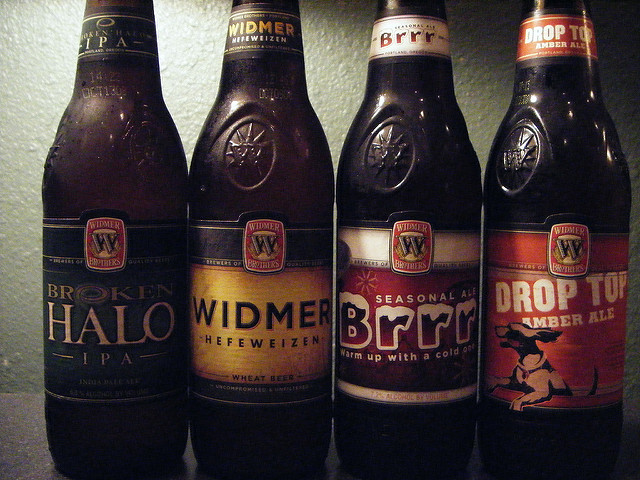 In 1984, brothers Kurt and Rob Widmer founded Widmer Brothers, which is now the 11th largest brewery in the United States.

It is natural for once small start-up companies to grow if they are successful. An example of this growth is the evolution of the Widmer Brothers Brewing Company, which started as two brothers brewing beer in their garage to become the 11th largest brewery in the United States. This growth happened over time as the popularity of their key product—Hefeweizen—grew in popularity; the company had to expand to meet demand, growing from the 2 founders to 400 employees in 2008 after Widmer Brothers merged with Redhook Ale Brewery to become Craft Brewers Alliance Inc. The newly formed company has five main departments, including Operations, Sales, Marketing, Finance, and Retail, who report to the CEO. Anheuser-Busch Companies Inc. continues to have a minority stake in both beer companies. So, while 50% of all new small businesses fail in their first year (Get ready, 2008), those that succeed often evolve into large, complex organizations over time.

Change is more likely to happen if the company is performing poorly and if there is a perceived threat from the environment. In fact, poorly performing companies often find it easier to change compared to successful companies. Why? High performance actually leads to overconfidence and inertia. As a result, successful companies often keep doing what made them a success in the first place. When it comes to the relationship between company performance and organizational change, the saying “nothing fails like success” may be fitting. For example, Polaroid Corporation was the number one producer of instant films and cameras in 1994. The company filed for bankruptcy in less than a decade, unable to adapt to the rapid advances in the 1-hour photo development and digital photography technologies. Successful companies that manage to change have special practices in place to keep the organization open to changes. As a case in point, Nokia finds that it is important to periodically change the perspective of key decision makers. For this purpose, they rotate heads of businesses to different posts to give them a fresh perspective. In addition to the success of a business, change in a company’s upper level management is a motivator for change at the organization level. Research shows that long-tenured CEOs are unlikely to change their formula for success. Instead, new CEOs and new top management teams create change in a company’s culture and structure (Barnett & Carroll, 1995; Boeker, 1997; Deutschman, 2005).