If a picture were really worth a thousand words, the issue of image versus text would be easily decided: use an image. That’s a thousand less words you have to write. Yet in the real world, the winner of “image versus text” isn’t as easy to determine. Both play a vital role in your communication efforts.

When to Use an Image

Use an image if the information is presented verbally. Are you preparing a PowerPoint presentation for a speaker? If so, you’ll want to stick with mostly images in your presentation. While you always want the audience to listen to the speaker, images actually help drive home the point the speaker makes and increases the memorability of that point as well. Therefore, you should use images that support the subject matter. Steve Jobs was famous for his image-based presentations. Watch “Steve Jobs Unveils the Original iPhone” for an example of this presentation style. Most TED Talk speakers follow Steve Jobs’s speaking style with regard to visuals. For example, watch Dave Brain’s TED Talk “What a Planet Needs to Sustain Life.”

Use an image if the information is complicated and can be better explained in a visual format. You may be charged with explaining the difference between nuclear fission and nuclear fusion. You can prepare an enormous amount of text to review the process of each and hope that your audience understands, or you can reduce the text and use the photo in Figure 1. 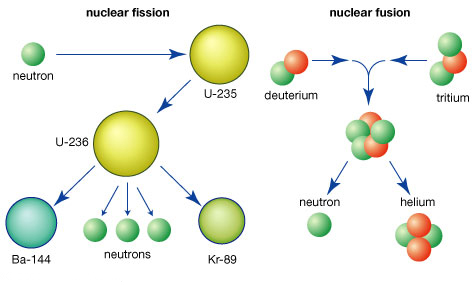 Use an image when it conveys something words just cannot. You may try to describe the northern lights to your reader, but he won’t truly understand the beauty of the aurora borealis until he sees it for himself. Images can also convey the emotion of a situation in ways words often can’t. For example, you can tell people to adopt shelter dogs, but a sweet puppy face looking out beseechingly from a cage will grab people’s emotional attention in a way the idea on its own can’t.

When to Use Text

Use text when you want to make a powerful point. If you want to leave your audience with a thought like “When the whole world is silent, even one voice becomes powerful.” (Malala Yousafzai), using text has far more impact than just showing a picture.

Use text when you’re creating a list or a mnemonic. Is your company a fan of SMART (Specific, Measurable, Achievable, Relevant, and Timely) goals, or do they employ the STAR (Situation, Task, Action, Result) candidate interview technique? It’s difficult to even discuss these without text.

Use text when an image just isn’t enough. And that’s a lot of the time! Prehistoric man used images to tell his story on the walls of caves, but words were invented for a reason, and that reason is that images can be limiting. Complex processes may be better served by a simplifying image, but in just about every other instance, complexity is better served with words.