Thus far, we’ve studied financial markets and institutions from 30,000 feet. We’re finally ready to “dive down to the deck” and learn how banks and other financial intermediaries are actually managed. We start with the balance sheet, a financial statement that takes a snapshot of what a company owns (assets) and owes (liabilities) at a given moment. The key equation here is a simple one:

ASSETS (aka uses of funds) = LIABILITIES (aka sources of funds) + EQUITY (aka net worth or capital).

Liabilities are money that companies borrow in order to buy assets, which is why liabilities are sometimes called “sources of funds” and assets, “uses of funds.” The hope is that the liabilities will cost less than the assets will earn, that a bank, for example, will borrow at 2 percent and lend at 5 percent or more. The difference between the two, called the gross spread, is the most important aspect of bank profitability. (The bank’s expenses and taxes, its cost of doing business, is the other major factor in its profitability.)

The equity, net worth, or capital variable is a residual that makes the two sides of the equation balance or equal each other. This is because a company’s owners (stockholders in the case of a joint stock corporation, depositors or policyholders in the case of a mutual) are “junior” to the company’s creditors. If the company shuts down, holders of the company’s liabilities (its creditors) get paid out of the proceeds of the assets first. Anything left after the sale of the assets is then divided among the owners.

If a company is economically viable, the value of what it owns will exceed the value of what it owes. Equity, therefore, will be positive and the company will be a going concern (will continue operating). If a company is not viable, the value of what it owes will exceed what it owns. Equity, therefore, will be negative, and the company will be economically bankrupt. (This does not mean, however, that it will cease operating at that time. Regulators, stockholders, or creditors may force a shutdown well before equity becomes zero, or they may allow the company to continue operating “in the red” in the hope that its assets will increase and/or its liabilities decrease enough to return equity to positive territory.)

The value of assets and liabilities (and, hence, equity) fluctuates due to changes in interest rates and asset prices. How to account for those changes is a difficult yet crucial subject because accounting rules will affect the residual equity and perceptions of a company’s value and viability. Sometimes, it is most appropriate to account for assets according to historical cost—how much the company paid to acquire it. Other times, it is most appropriate to account for assets according to their current market value, a process called “marking to market.” Often, a blend of the two extremes makes the best sense. For instance, a bank might be allowed to hold a bond at its historical cost unless the issuer defaults or is downgraded by a rating agency. 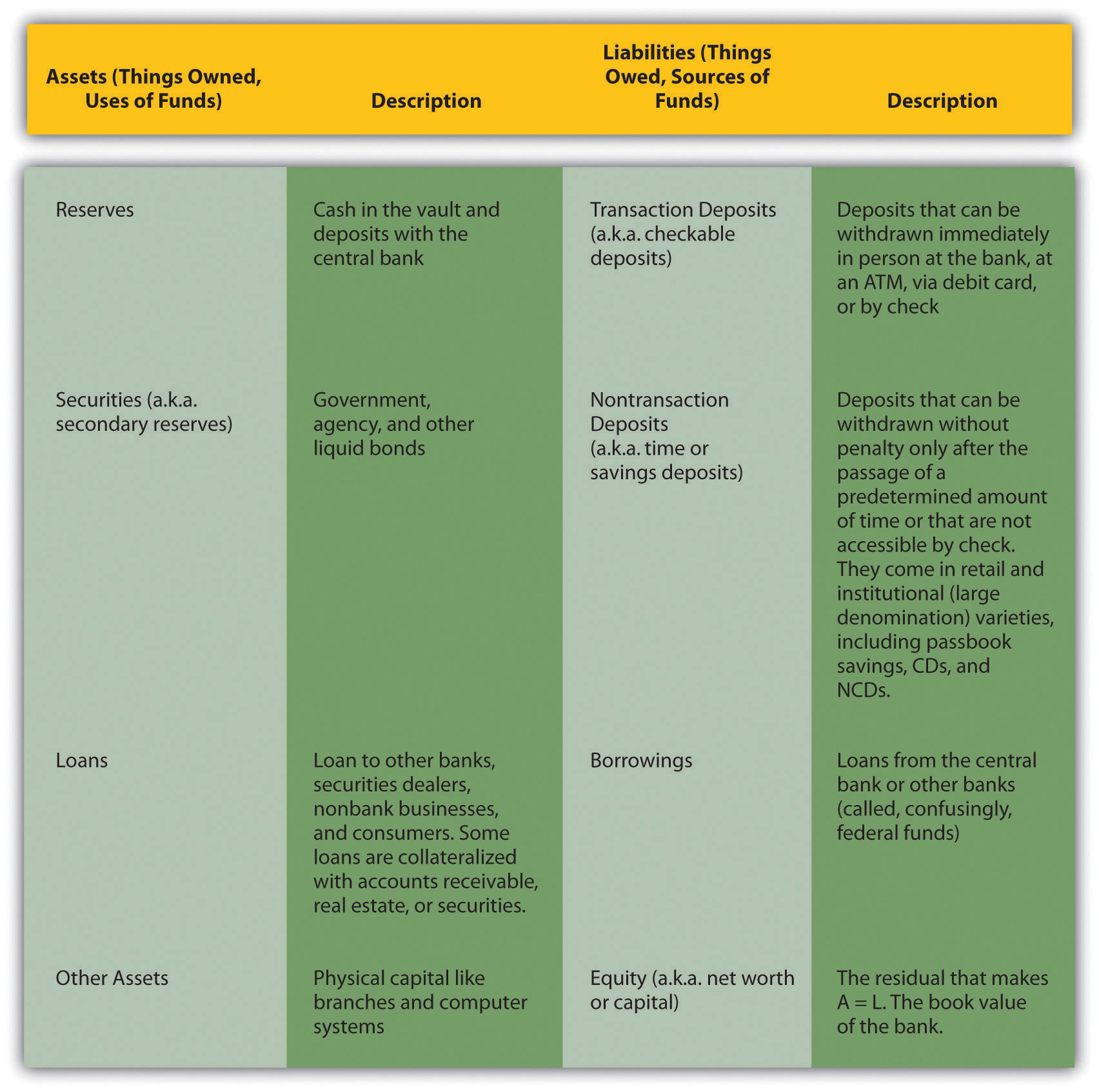 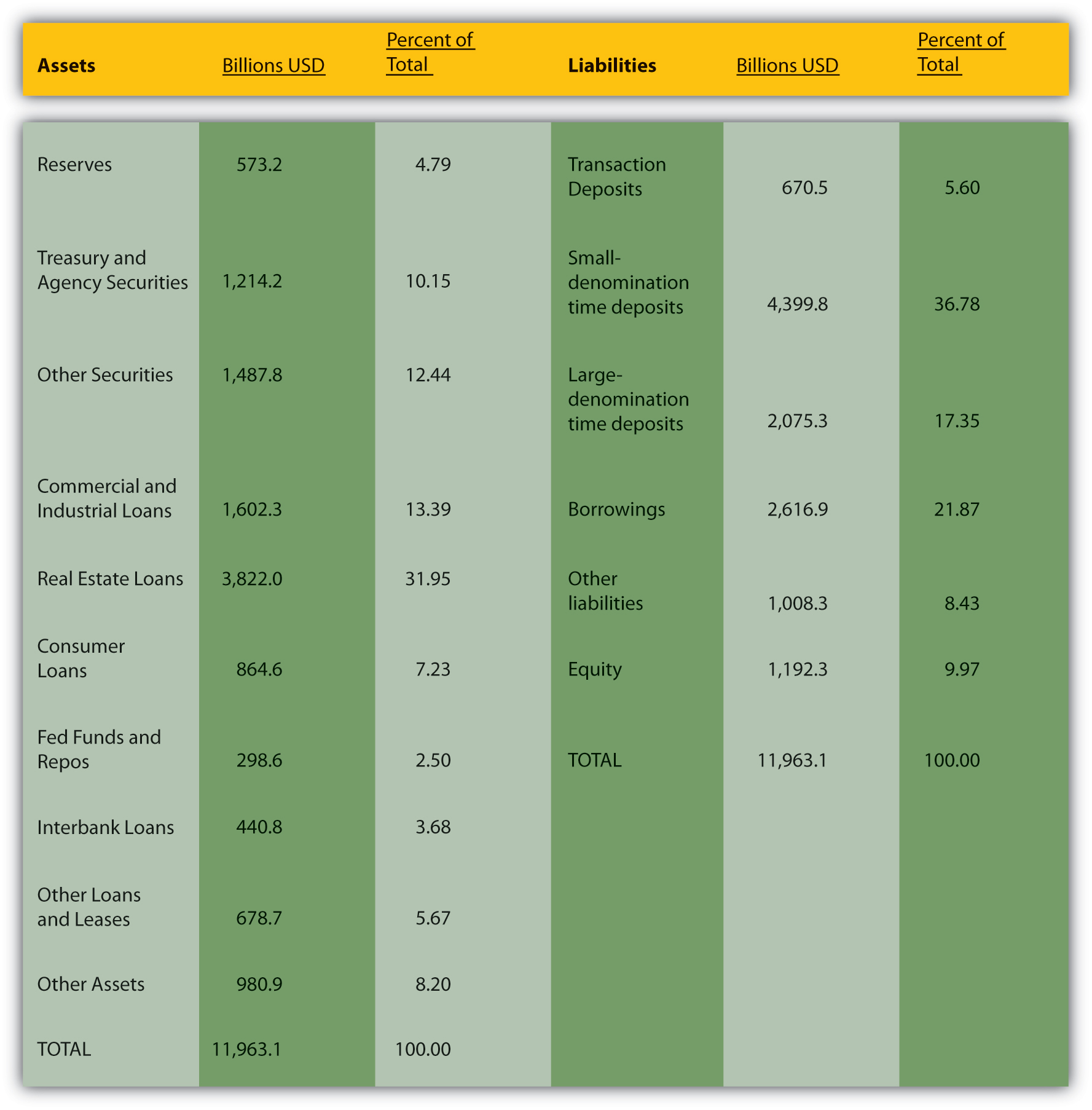 In the first half of the nineteenth century, bank reserves in the United States consisted solely of full-bodied specie (gold or silver coins). Banks pledged to pay specie for both their notes and deposits immediately upon demand. The government did not mandate minimum reserve ratios. What level of reserves do you think those banks kept? (Higher or lower than today’s required reserves?) Why?

With some notorious exceptions known as wildcat banks, which were basically financial scams, banks kept reserves in the range of 20 to 30 percent, much higher than today’s required reserves. They did so for several reasons. First, unlike today, there was no fast, easy, cheap way for banks to borrow from the government or other banks. They occasionally did so, but getting what was needed in time was far from assured. So basically borrowing was closed to them. Banks in major cities like Boston, New York, and Philadelphia could keep secondary reserves, but before the advent of the telegraph, banks in the hinterland could not be certain that they could sell the volume of bonds they needed to into thin local markets. In those areas, which included most banks (by number), secondary reserves were of little use. And the potential for large net outflows was higher than it is today because early bankers sometimes collected the liabilities of rival banks, then presented them all at once in the hopes of catching the other guy with inadequate specie reserves. Also, runs by depositors were much more frequent then. There was only one thing for a prudent early banker to do: keep his or her vaults brimming with coins.