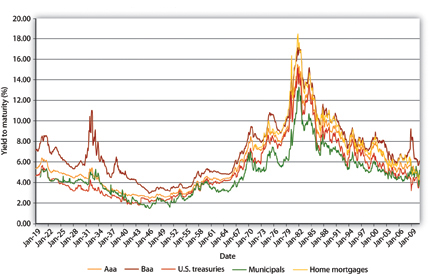 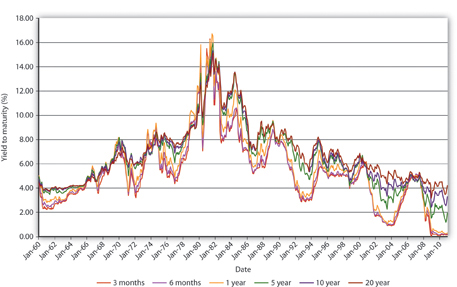 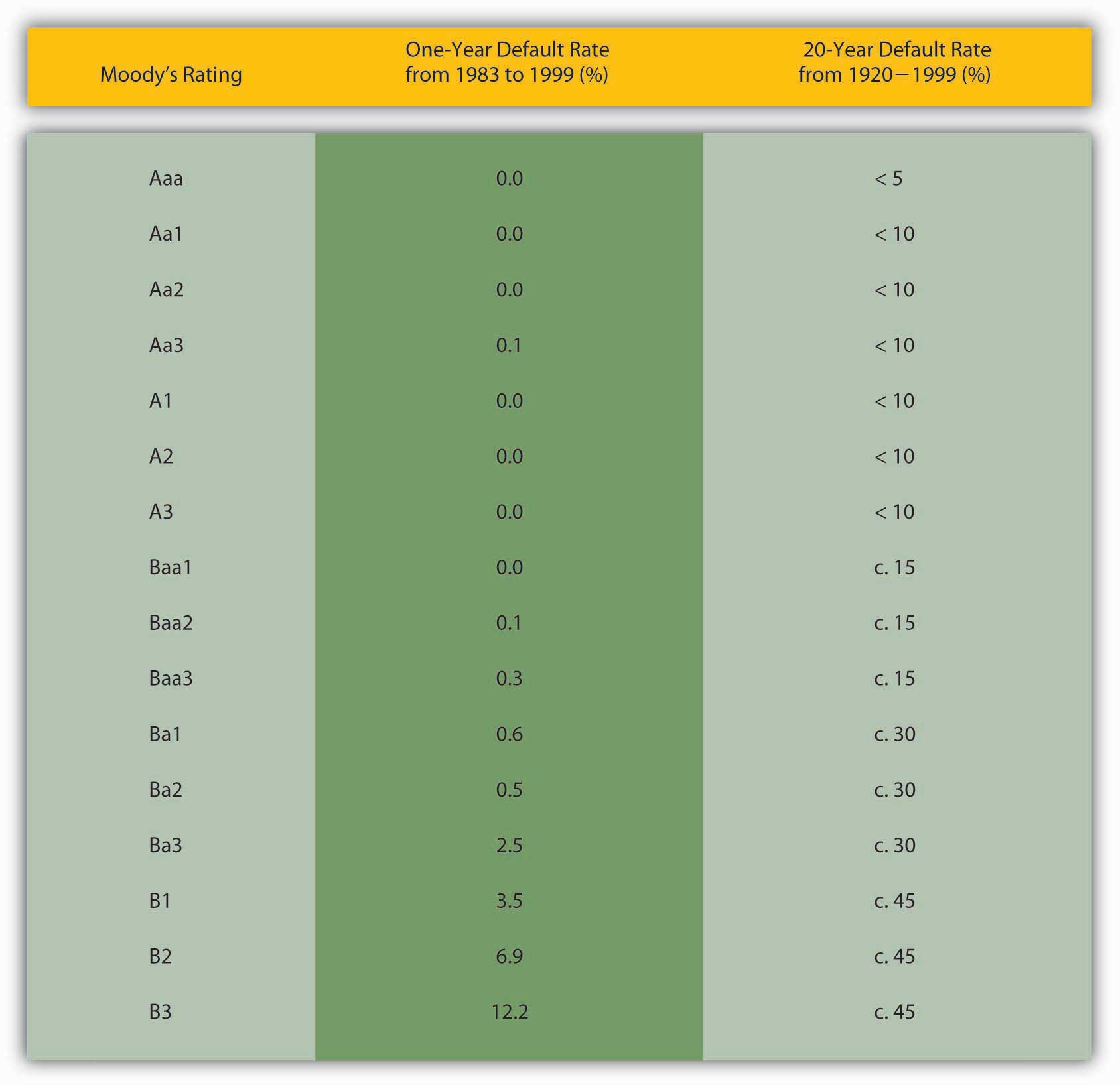 Equipped with this knowledge, we can easily understand the reasons for the rank ordering in Figure 6.1 "The risk structure of interest rates in the United States, 1919–2010".Figure 6.3 "Default rates on bonds rated by Moody’s from 1983 to 1999", by the way, should not be taken as evidence that credit rating agencies provide investors with useful information. Before 1970 or so, they sold ratings to investors and generally did a good job of ranking risks in a competitive market for ratings. Thereafter, however, they formed a government-sanctioned oligopoly and began to charge issuers for ratings. The resulting conflict of interest degraded the quality of ratings to the point that the big three rating agencies failed to predict the crises of 1997–98 in Southeast Asia and 2008 in the United States and Europe. Today, few investors still take their ratings seriously, as evidenced by the fact that Treasury bond prices actually increased after U.S. government bonds were downgraded by credit rating agency Standard and Poor’s in August 2011. Corporate Baa bonds have the highest yields because they have the highest default risk (of those graphed), and the markets for their bonds are generally not very liquid. Corporate Aaa bonds are next because they are relatively safer (less default risk) than Baa bonds and they may be relatively liquid, too. U.S. Treasuries are extremely safe and the markets for them are extremely liquid, so their yields are lower than those of corporate bonds. In other words, investors do not need as high a yield to own Treasuries as they need to own corporates. Another way to put this is that investors place a positive risk premium (to be more precise, a credit or default risk, liquidity, and tax premium) on corporate bonds.

Corporate bond ratings go all the way down to C (Moody’s) or D (Standard and Poor’s). (These used to be called high-yield or junk bonds but are now generally referred to as B.I.G. or below investment grade bonds.) If plotted on Figure 6.1 "The risk structure of interest rates in the United States, 1919–2010", where would the yields of such bonds land? How do you know?

They would have higher yields and hence would be above the Baa line because they would have a higher default risk, the same tax treatment, and perhaps less liquidity.

The low yield on munis is best explained by their tax exemptions. Before income taxes became important, the yield on munis was higher than that of Treasuries, as we would expect given that Treasuries are more liquid and less likely to default. During World War II, investors, especially wealthy individuals, eager for tax-exempt income and convinced that the fiscal problems faced by many municipalities during the depression were over, purchased large quantities of municipal bonds, driving their prices up (and their yields down). Almost all the time since, tax considerations, which are considerable given our highest income brackets exceed 30 percent, have overcome the relatively high default risk and illiquidity of municipal bonds, rendering them more valuable than Treasuries, ceteris paribus.

Figure 6.4 Risk premiums and bond spreads during the Great Depression, 1929–1939 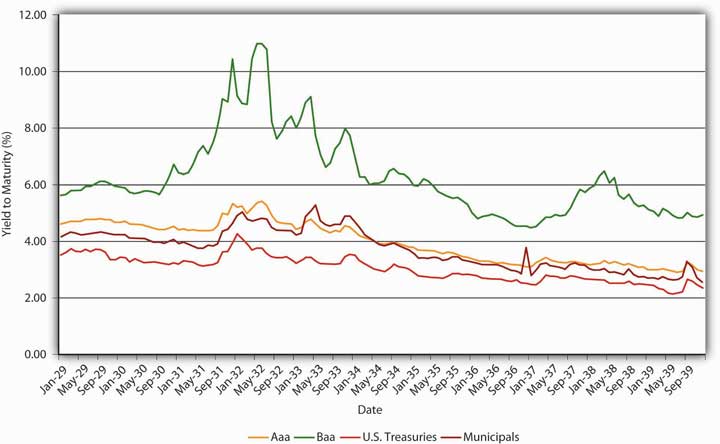 Risk, after-tax returns, and liquidity also help to explain changes in spreads, the difference between yields of bonds of different types (the distance between the lines in Figure 6.1 "The risk structure of interest rates in the United States, 1919–2010" and Figure 6.4 "Risk premiums and bond spreads during the Great Depression, 1929–1939"). The big spike in Baa bond yields in the early 1930s, the darkest days of the Great Depression, was due to one simple cause: companies with Baa bond ratings were going belly-up left and right, leaving bondholders hanging. As Figure 6.4 "Risk premiums and bond spreads during the Great Depression, 1929–1939"shows, companies that issued Aaa bonds, municipalities, and possibly even the federal government were also more likely to default in that desperate period, but they were not nearly as likely to as weaker companies. Yields on their bonds therefore increased, but only a little, so the spread between Baa corporates and other bonds increased considerably in those troubled years. In better times, the spreads narrowed, only to widen again during the so-called Roosevelt Recession of 1937–1938.

Figure 6.5 The flight to quality (Treasuries) and from risk (corporate securities)

In the confusion following the terrorist attacks on New York City and Washington, DC, in September 2001, some claimed that people who had prior knowledge of the attacks made huge profits in the financial markets. How would that have been possible?

The most obvious way, given the analyses provided in this chapter, would have been to sell riskier corporate bonds and buy U.S. Treasuries on the eve of the attack in expectation of a flight to quality, the mass exchange of risky assets (and subsequent price decline) for safe ones (and subsequent price increase).

Time for a check of your knowledge.