Figure 1. This skier speeds down the slope in an Olympic race. What’s your guess as to the steepness, or slope, of this ski hill?

What the Slope Means

The concept of slope is very useful in economics, because it measures the relationship between two variables. A positive slope means that two variables are positively related—that is, when x increases, so does y, and when x decreases, y also decreases. Graphically, a positive slope means that as a line on the line graph moves from left to right, the line rises. We will learn in other sections that “price” and “quantity supplied” have a positive relationship; that is, firms will supply more when the price is higher. A negative slope means that two variables are negatively related; that is, when x increases, y decreases, and when x decreases, y increases. Graphically, a negative slope means that as the line on the line graph moves from left to right, the line falls. We will learn that “price” and “quantity demanded” have a negative relationship; that is, consumers will purchase less when the price is higher. A slope of zero means that y is constant no matter the value of x. Graphically, the line is flat; the rise over run is zero. 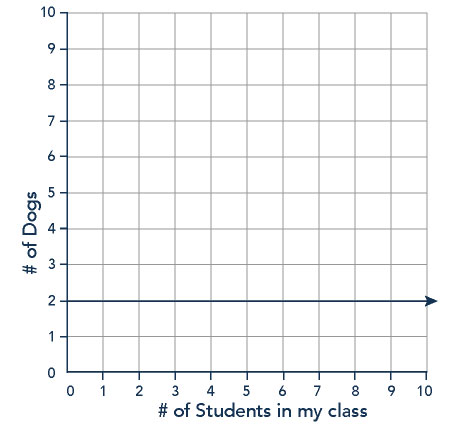 Use the graph to find the slope of the line. Next, move horizontally to the point . Count the number of units. The run is 4 units. It is positive as you moved to the right.

Then solve using the formula:

These next questions allow you to get as much practice as you need, as you can click the link at the top of the first question (“Try another version of these questions”) to get a new set of questions. Practice until you feel comfortable doing the questions and then move on.

Graphs of economic relationships are not always straight lines. In this course, you will often see nonlinear (curved) lines, like Figure 6, which shows the relationship between quantity of output being produced and the cost of producing that output. As the quantity of output increases, the total cost increases at a faster rate. Table 1 shows the data behind this graph. Figure 6. In this example, the total cost of production increase at a faster rate when the quantity of output increases.

As an example, consider the slope of the total cost curve, above, between points A & B.  Going from point A to point B, the rise is the change in total cost (i.e. the variable on the vertical axis):

Similarly, the run is the change in quantity (i.e. the variable on the horizontal axis):

Thus, the slope of a straight line between these two points would be 9/1 = 9. In other words, as we increase the quantity of output produced by one unit, the total cost of production increases by $9.

A negative slope that is larger in absolute value (that is, more negative) means a steeper downward tilt to the line. A slope of zero is a horizontal line. A vertical line has an infinite slope. Figure 7. A larger y-intercept shifts the entire graph to cross the y-axis at a higher point.