Swiss criminal law is first of all dominated by the principle of legality. Article 1 states that sanctions (i.e. sentences and measures) may only be imposed for a behaviour that the law explicitly threatens with punishment.30 Article 1 thus encompasses two principles. Firstly, there is the principle of nullum crimen sine lege: no act or omission shall be considered a crime unless the law explicitly says so. For example, today there is no rule in the Swiss criminal code prohibiting homosexual acts.31 Thus, they are not a crime and courts cannot declare them illegal. Secondly, Article 1 contains the principle nulla poena sine lege: no penalty without law. This principle stipulates that all sanctions imposed for criminal acts must be provided for in the law. For example, the death penalty has been abolished in Switzerland. This means that no one in Switzerland can be sentenced to death, even for the most heinous crime. 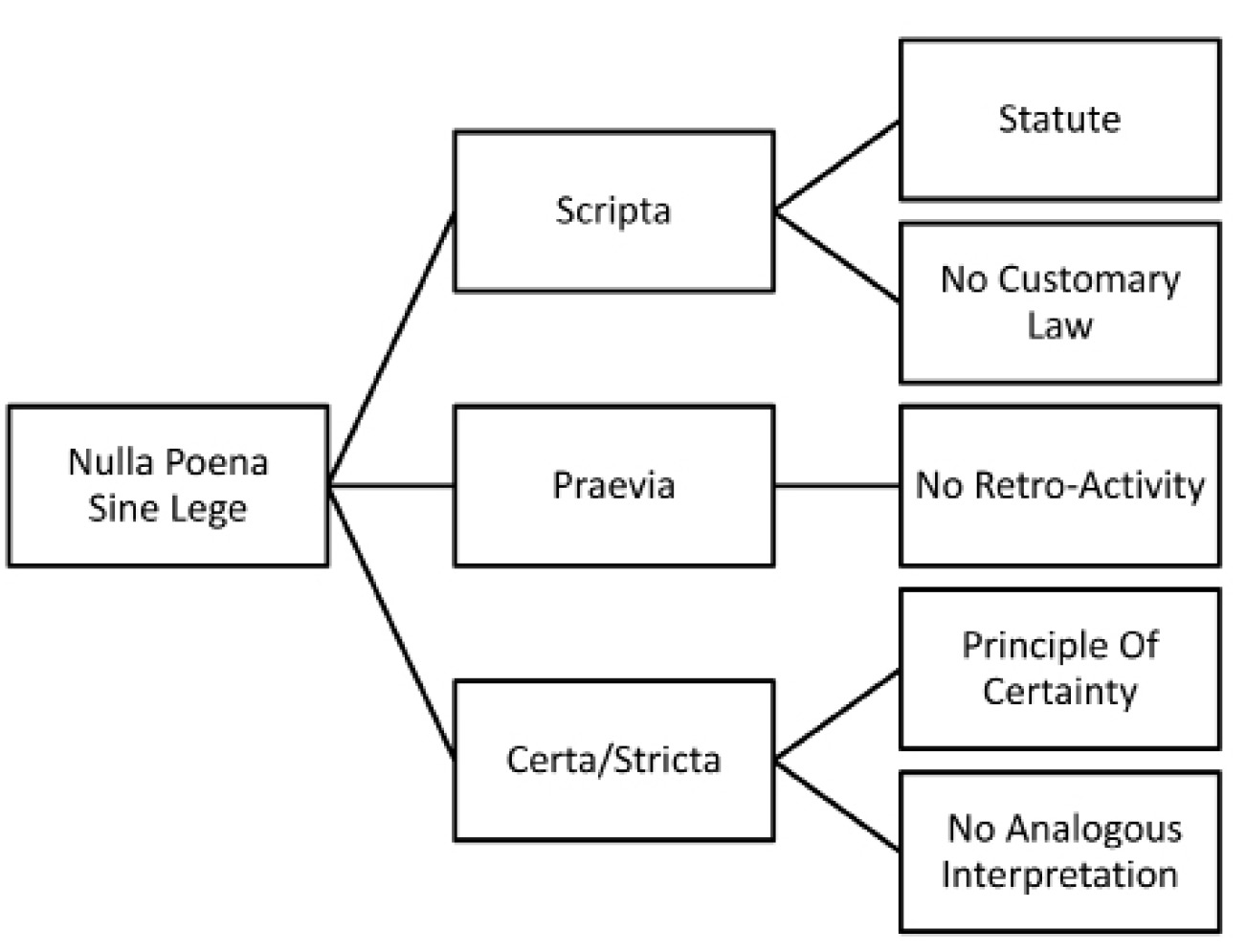 The first sub-principle of nulla poena sine lege is the nulla poena sine lege scripta principle: no penalty without written law. This principle precludes the creation or existence of customary criminal law; all crimes must be laid down by a formal Act of Parliament. For example, several cantonal criminal codes used to prohibit extra-marital sexual relations: such a prohibition could not be reintroduced today by declaring it a customary criminal rule.

The second sub-principle is the nulla poena sine lege praevia principle: no penalty without pre-existing law. In general, criminal law may not be applied retroactively (Article 2 I) unless the new provision is more lenient (Article 2 II). For example, since 1 October 2002, abortions have been completely legalised during the first 12 weeks of the pregnancy (before this, abortions were only permitted for medical reasons). Because the new 12-weeks-rule is milder, it could be applied retroactively.

The third sub-principle is the the nulla poena sine lege certa/stricta principle, which demands that the elements of a crime and the sanctions which apply to it be clearly defined. Addressees of rules must get a fair warning: they must know exactly what the consequences of their actions will be. An example of a provision which infringes this principle is Article 303, which imposes an unspecified monetary or custodial sentence for false accusations. An offender can face any sentence from 3 units of monetary penalty to 20 years of imprisonment. The nulla poena sine lege certa/stricta principle also prohibits criminal law operating on the basis of analogies. For example, Article 215 prohibits bigamy: this prohibition could not be extended to cohabitation by analogy, to meet a case where a woman has two boyfriends at a time.

“Punishment without guilt is nonsense, barbarism”, wrote ERNST HAFTER, one of the early and influential criminal law scholars in Switzerland, in 1946. The principle nulla poena sine culpa (keine Strafe ohne Schuld; no punishment without culpability) is crucial to Swiss criminal law. In fact, to understand the notion of Schuld is to understand the concept of Swiss criminal law itself. Schuld has many different meanings; it can be used interchangeably to convey notions like culpability, guilt, blame, fault, and responsibility. Criminal liability in Swiss law is a three-stage concept: all three stages of the test must be met in order for criminal liability to apply. First, the objective and subjective elements of the crime (Tatbestandsmässigkeit) have to be established: has the victim been killed by the defendant (objective element; “actus reus”)? Did the defendant kill the victim intentionally (subjective element; “mens rea”)? Second, the unlawfulness (Rechtswidrigkeit) of the act has to be determined. Did the defendant kill in legitimate self-defence? Was a theft of food warranted by the necessity to survive? Did the masochist consent to violent sexual practices? Third, the culpability (Schuld) of the offender has to be assessed. Can the defendant be blamed for the act? Perpetrators can only be held responsible for their unlawful acts if they were able to both grasp the demands imposed on them by legal rules and act accordingly (Article 19).

Culpability can be excluded on three different grounds. The first ground is the defendant’s lack of criminal responsibility. If wrongdoers are unable to understand the wrongfulness of their act they cannot be held to account. An example of this is when the offender has a severely low IQ. However, it should be noted that this ground is not often accepted by courts. Children under the age of ten are legally excluded from criminal responsibility (Article 3 Juvenile Criminal Law Act)32. Their inability to fully assess wrongfulness is presumed by law. Criminal responsibility is also excluded if a person is able to assess wrongfulness but is unable to act accordingly. In most cases where culpability is excluded, it is under this ground of inability to control one’s actions despite knowing they are wrong. This ability to restrain oneself may be absent in some manifestations of paranoid schizophrenia. Further, it can be absent where the defendant is under the influence of extreme emotions and acts in the heat of the moment. The typical example of this latter sort of case is where the defendant, just previously to committing an offence of assault, has found out that his/her partner is conducting an affair.

The second ground for the exclusion of culpability is an error of law. Again, in this situation the person is not aware of the wrongfulness of their act. Yet the reason for this failure is not a mental deficiency: instead, it is missing or incorrect information about the law. However, the standard is high. Error of law is only accepted as grounds for excluding culpability if the perpetrator both did not and, crucially, could not have known that he or she was acting unlawfully. In a famous case from 1978, a 19-year-old Sicilian immigrant had sex with a 15-year-old Swiss girl. He successfully claimed that he did not know the concept of the legal age of consent. He had thought that sexual intercourse with a minor was only punishable if he did not intend to marry his sexual partner.33 It is highly questionable whether the Federal Supreme Court would still rule today that this man could not have known that his act was illegal.

Thirdly, culpability is excluded if the wrongdoer could not have been reasonably expected to act lawfully. An example of when this unreasonableness standard can be met is where a perpetrator kills a person in order to save his or her own life. Had the famous English R v. Dudley and Stephens case of 188434 – where three shipwrecked sailors killed and then ate a cabin boy to avoid starvation – been judged in Switzerland, the defendants would have had to be acquitted. Though the killing was unlawful, it would have been excusable under Swiss law to end the boy’s life in such extreme circumstances, meaning the defendants would not have met the culpability test. They could not reasonably have been expected to sacrifice their own lives, by not killing and eating the cabin boy.

There is one hugely intriguing problem regarding culpability which remains unsolved. If culpability is about blaming someone for having acted unlawfully, then it must be established that this person could have acted differently. In other words, culpability hinges on free will; there can be no culpability without freedom of will. If, as some believe, our actions are predetermined, then we cannot be blamed for having “chosen” to do something illegal. The current state of knowledge allows us neither to prove nor disprove freedom of will. Currently, the notion that any perpetrator could have chosen to behave otherwise is therefore merely presumed as an “inevitable fiction” in (Swiss) criminal law.

30The “official” translation of Article 1 by the Swiss Government is incorrect in many ways: “No penalty (recte: sanction) without a law. No one may be punished (recte: no sanctions may be imposed) for an act (recte: or omission) unless it has been expressly declared to be an offence (recte: by the law).”