“[i]nternational lawyers called to mediate between universalism and nationalism, humanitarian aspirations and colonial impulses, technical, economic and financial challenges, nations and states, recognized states as subjects of knowledge with regard to that they incorporated a deep supranational dimension into their general principles. International law became the product of a historical reflection by an elite of intellectuals that, through an organic relationship with the conscience of civilized nations, translated value into a scientific system”.13

The international lawyers of this century, in fact, lived through a period of radical change in international affairs. This had begun in the late 18th century with the American and French Revolutions, the collapse of the Napoleonic Empire and the events that led to the Congress of Vienna, during which the Holy Alliance had laid the ground for the development of a new international order. The order of 1815 had to be redesigned in the mid-19th century due to the Crimean war that ended with the agreement of the Paris Treaty of 1856. Important developments in international law during the 19th century, particularly regarding the role played by Swiss jurists and men, are the emergence of the international humanitarian law, the creation of the International Law Institut (Institut de droit international) in 1873, and different attempts to codify international law.

1. HENRY DUNANT AND THE INTERNATIONAL COMMITTEE OF THE RED CROSS

HENRY DUNANT (1828–1910), a Swiss merchant from Geneva, contributed fundamentally to the development of humanitarian law by formulating the idea of the International Committee of the Red Cross. DUNANT was born into a wealthy and influential family in Geneva. From 1853, he worked in North Africa, overseeing the French colonies’ commercial interests. In Algeria, he encountered difficulties with the French authorities: it was due to such circumstances that he travelled to meet NAPOLEON III in Italy where the latter was battling Austrian forces at the time. In 1859, DUNANT arrived in the small town of Solferino during his trip to meet Napoleon, where close to 40’000 soldiers lay dead or wounded on the battlefield. DUNANT was confronted with this sight during his visit. There were no organised medical divisions within the armed forces. Medical provisions were inadequate, doctors scarce, equipment poor, and transport sparse. Many soldiers died from simple wounds as a result of a lack of knowledge or proper care. In response to this state of affairs, HENRY DUNANT brought in food, water, and supplies to try to ensure adequate medical basic medical aid. He rallied the local population into providing assistance, making no distinction between the nationalities of the wounded. The term “tutti fratelli” (“all brothers”) was coined as rationale for the principle of impartial medical assistance in armed conflict.

DUNANT recorded his experience in Italy in the book “A Memory of Solferino”, which he wrote upon his return to Geneva and published in 1862. Through the medium of the book, he campaigned for the humane treatment of combatants and the protection of the wounded during warfare. The Geneva Public Welfare Society, that had as chairman the jurist GUSTAVE MOYNIER, received DUNANT’S plea positively, forming a committee in response to the publication. In February 1863 the five-member committee, constituted by Dunant, Moynier, Dr. Louis Appia, Dr. Théodore Maunoir and General Dufour convened to discuss Dunant‘s proposals. As a result they formed the Permanent International Committee for the Relief of Wounded Soldiers that later became the International Committee of the Red Cross (ICRC).

In October of the same year, an international conference with governmental representatives was organized to formalise the concept of introducing national relief societies. The conference also agreed upon a standard emblem which would identify medical personnel on the battlefield: a red cross on a white background; a reversed-colour tribute to the Swiss flag and the neutrality it represents.14

-Relief to the wounded without any distinction as to nationality

-Neutrality (inviolability) of medical personnel and medical establishments and units

-The distinctive symbol of the organisation: the red cross on a white ground.15 Despite his achievements in the field of humanitarian law, DUNANT himself had a life that could be considered somewhat unfortunate. In 1867, his commercial interests in Algeria took a downturn leading to his eventual bankruptcy. Above all he had to resign from the Red Cross – the very organisation his ideas had inspired. He left Geneva in 1867. From 1887 until his death in 1910 he lived in relative isolation in the Swiss village of Heiden. In 1901 he received the first Nobel Peace Prize, jointly with the French pacifist FRÉDÉRIC PASSY. DUNANT is buried in the Sihlfeld cemetery in Zurich.

2. FOUNDING OF THE INSTITUTE OF INTERNATIONAL LAW (1873) 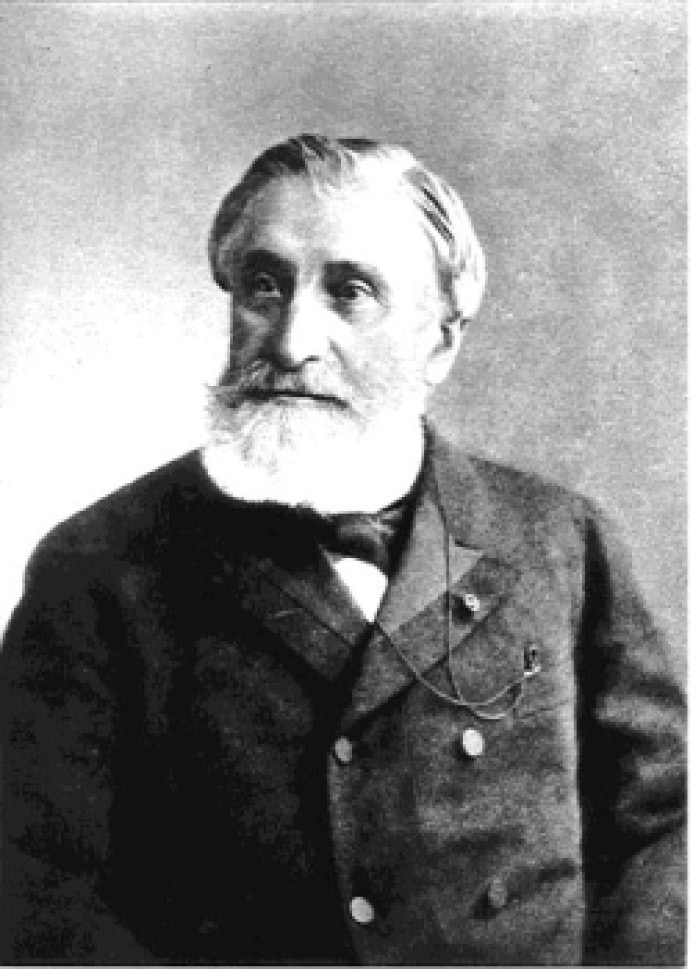 GUSTAVE MOYNIER (1826–1910) played a significant role in shaping the foundations of international humanitarian law, in two key ways. First, together with HENRY DUNANT, he initiated the founding of the ICRC. Secondly, he was also involved in working towards the establishment of a permanent international criminal court. MOYNIER was born in 1826 into a commercial and industrial family of Geneva. Due to political unrest there, he relocated to Paris at the age of twenty where he subsequently completed his legal studies. His marriage to JEANNE-FRANÇOISE PACCARD afforded him the financial independence necessary to allow him to dedicate his time to questions of public welfare upon his return to Geneva in 1851. MOYNIER’S attention had been caught by HENRY DUNANT’S witness account and associated analysis regarding the battle at Solferino. He brought the matter before the Geneva Society for Public Welfare which examined DUNANT’S vision of institutionalising the care for the wounded during armed conflict. MOYNIER played an active role in the organisation. He took a pragmatic approach to the organisation which eventually clashed with the idealism of HENRY DUNANT, leading to the deterioration of their relationship. Ultimately, HENRY DUNANT was required to leave the organisation, while MOYNIER remained its president until his death.21

Remarkably considering the time period, MOYNIER also coined the idea of creating an international criminal tribunal to prosecute breaches of humanitarian law. In 1872, he published his draft “Note on the creation of a specific international judicial institution to prevent and punish violations of the Geneva Convention” (“Note sur la Création d’une Institution Judiciaire Internationale propre à prévenir et à réprimer les Infractions à la Convention de Genève”). Within this draft, he proposed a panel that would decide on cases involving breaches of the Geneva Convention occurring during a war between member states to the treaties. MOYNIER saw the need to enforce the Convention and direct criminal responsibility to the respective perpetrators and to impose monetary penalties against belligerent states.22

His draft proposal was widely recognized but also heavily criticised. Some lamented the lack of an enforcing authority with regard to the proposals. Others did not see the need for the creation of a new institution, preferring to stick to the traditional means of bilateral arbitration. Interestingly, MOYNIER himself had followed a fundamental change of heart with his draft proposal. Later on, he had been opposed to the idea of granting jurisdiction over international criminal matters to an international body, believing that the threat of critical public opinion and indignation would suffice to deter potential breaches of humanitarian law.23

Aside from the proposal for an international criminal tribunal, MOYNIER also drafted a manual which aimed to codify already existing legal principles of warfare. This Manual on the Laws of War on Land was more favourably received, being unanimously adopted by the Institute of International Law at its conference in Oxford in 1880. It is still known as The Oxford Manual to this day.24 JOHANN CASPAR BLUNTSCHLI (1808–1881) was born in Zurich. He attended school in Zurich and consequently moved to complete his legal studies in Berlin and Bonn, eventually being awarded with a doctoral degree from the University of Bonn. He was a student of FRIEDRICH CARL VON SAVIGNY who introduced him to the so called German Historical School; which influenced BLUNTSCHLIS own work and teaching substantially. Upon his return to Zurich in 1830, he became extraordinary professor in 1833 and then ordinary professor in 1836. He held seats in the municipal and cantonal parliaments of Zurich and founded the liberal-conservative party. In 1840, BLUNTSCHLI was asked to finalise the drafting efforts for the Zurich civil code, which he successfully did. In 1844, he lost the election for mayor of Zurich, a matter of sore regret for him. In 1847, BLUNTSCHLI decided to withdraw from Swiss politics and once again left his hometown to live in Germany. He became professor in Munich and later Heidelberg and assumed several offices in German political life.

“The Modern Law of War” was the product of a fruitful relationship between BLUNTSCHLI and FRANCIS LIEBER (1800–1872) of Columbia University in New York. LIEBER was born in Berlin but fled to the United States from Prussia in 1826. He is famous for drafting the “Instructions for the Government of Armies of the United States in the Field”, also known as the Lieber Code – a set of rules of warfare that ABRAHAM LINCOLN made applicable to the Federal Army in the U.S. Civil War in 1863.26 BLUNTSCHLI and LIEBER maintained intensive written correspondence on a range of topics: from books to read to law, politics, and theology. Their exchange was mutually beneficial, each being influenced by the thinking of the other. The relationship further culminated in the formulation of fundamental principles of international law. The principles that LIEBER had formulated in the Lieber Code were expanded upon by BLUNTSCHLI in his own work “The Modern Law of War”. They had a fundamental influence on the codification of the laws of war, manifested in the Convention respecting the Laws and Customs of War on Land as developed at the Hague Peace Conferences of 1899 and 1907.

With his book “The Modern International Law of Civilized States”, BLUNTSCHLI successfully created a comprehensive codification of international law. He wanted to prove the legal quality of international law by overcoming the perceived conflict at the time between natural law and positive law. Unlike his contemporaries, he did not merely write a commentary on existing treaties and customs. Instead, he presented a comprehensive code that considered the dynamic or ‘organic’ evolution of law and society.27 The book was written in a clear and informative manner and was thus widely received. Numerous translations led to the publication becoming influential worldwide. His code consists of 862 Articles preceded by an elaborate introduction dealing with the nature, objects, and basis of international law. It deals with the entire law of nations in three general parts:

BLUNTSCHLI said of his own work:

“It is substantially the same kind of work as that which I early attempted with success at Zurich upon the narrow field of a little Swiss republic with reference to private law. The principles of that work were now only transferred to the broader field of civilised states in general, and were applied to the moving stream of international relations and legal opinions”.28

14International Committee of the Red Cross, The History of the Emblems, 2007, (https://perma.cc/M4LV-6XGX).

17ROBERT KOLB, The Protection of the Individual in Times of War and Peace, in: Bardo Fassbender/Anne Peters (eds.), The Oxford Handbook of the History of International Law, Oxford 2012, pp. 324.

18International Committee of the Red Cross, Founding and Early Years of the ICRC, 2010 (https://perma.cc/64BT-RQWW).

19More information on the website of the Institute: http://www.idi-iil.org/en/ (https://perma.cc/692V-FLTK).

27MARTTI KOSKENNIEMI, The Gentle Civilizer of Nations, The Rise and Fall of International Law, Cambridge 2002, pp. 42.