Corporate social responsibility refers to the approach that an organization takes in balancing its responsibilities toward different stakeholders when making legal, economic, ethical, and social decisions. What motivates companies to be “socially responsible” to their various stakeholders? We hope it’s because they want to do the right thing, and for many companies, “doing the right thing” is a key motivator. The fact is, it’s often hard to figure out what the “right thing” is: What’s “right” for one group of stakeholders isn’t necessarily just as “right” for another. One thing, however, is certain: Companies today are held to higher standards than ever before. Consumers and other groups consider not only the quality and price of a company’s products but also its character. If too many groups see a company as a poor corporate citizen, it will have a harder time attracting qualified employees, finding investors, and selling its products. Good corporate citizens, by contrast, are more successful in all these areas.

Figure 2.6 “The Corporate Citizen” presents a model of corporate responsibility based on a company’s relationships with its stakeholders. In this model, the focus is on managers—not owners—as the principals involved in all these relationships. Here, owners are the stakeholders who invest risk capital in the firm in expectation of a financial return. Other stakeholders include employees, suppliers, and the communities in which the firm does business. Proponents of this model hold that customers, who provide the firm with revenue, have a special claim on managers’ attention. The arrows indicate the two-way nature of corporation-stakeholder relationships: All stakeholders have some claim on the firm’s resources and returns, and it’s management’s job to make decisions that balance these claims (Baron, D. P., 2003). Let’s look at some of the ways in which companies can be “socially responsible” in considering the claims of various stakeholders.

Owners invest money in companies. In return, the people who run a company have a responsibility to increase the value of owners’ investments through profitable operations. Managers also have a responsibility to provide owners (as well as other stakeholders having financial interests, such as creditors and suppliers) with accurate, reliable information about the performance of the business. Clearly, this is one of the areas in which WorldCom managers fell down on the job. Upper-level management purposely deceived shareholders by presenting them with fraudulent financial statements.

Finally, managers have a fiduciary responsibility to owners: They’re responsible for safeguarding the company’s assets and handling its funds in a trustworthy manner. This is a responsibility that was ignored by top executives at both Adelphia and Tyco, whose associates and families virtually looted company assets. To enforce managers’ fiduciary responsibilities for a firm’s financial statements and accounting records, the Sarbanes-Oxley Act of 2002 requires CEOs and CFOs to attest to their accuracy. The law also imposes penalties on corporate officers, auditors, board members, and any others who commit fraud.

Companies are responsible for providing employees with safe, healthy places to work—as well as environments that are free from sexual harassment and all types of discrimination. They should also offer appropriate wages and benefits. In the following sections, we’ll take a closer look at each of these areas of responsibility.

Though it seems obvious that companies should guard workers’ safety and health, a lot of them simply don’t. For over four decades, for example, executives at Johns Manville suppressed evidence that one of its products, asbestos, was responsible for the deadly lung disease developed by many of its workers (Gellerman, 2003). The company concealed chest X-rays from stricken workers, and executives decided that it was simply cheaper to pay workers’ compensation claims (or let workers die) than to create a safer work environment. A New Jersey court was quite blunt in its judgment: Johns Manville, it held, had made a deliberate, cold-blooded decision to do nothing to protect at-risk workers, in blatant disregard of their rights (Gellerman, 2003).

About four in one hundred thousand U.S. workers die in workplace “incidents” each year. The Department of Labor categorizes deaths caused by conditions like those at Johns Manville as “exposure to harmful substances or environments.” How prevalent is this condition as a cause of workplace deaths? See Figure 2.7 “Workplace Deaths by Event or Exposure, 2010”, which breaks down workplace fatalities by cause. Some jobs are more dangerous than others. For a comparative overview based on workplace deaths by occupation, see Figure 2.8 “Workplace Deaths by Industry, 2010”. Requiring workers to wear protective clothing like gloves, hard hats, and goggles cuts down on accidents. It also helps the firm reduce time lost from work due to injuries.

For most people, fortunately, things are better than they were at Johns Manville. Procter & Gamble (P&G), for example, considers the safety and health of its employees paramount and promotes the attitude that “Nothing we do is worth getting hurt for.” With nearly one hundred thousand employees worldwide, P&G uses a measure of worker safety called “total incident rate per employee,” which records injuries resulting in loss of consciousness, time lost from work, medical transfer to another job, motion restriction, or medical treatment beyond first aid. The company attributes the low rate of such incidents—less than one incident per hundred employees—to a variety of programs to promote workplace safety (Procter & Gamble, 2003).

What is sexual harassment? The law is quite precise:

To prevent sexual harassment—or at least minimize its likelihood—a company should adopt a formal anti-harassment policy describing prohibited conduct, asserting its objections to the behavior, and detailing penalties for violating the policy (Grossman, 2012). Employers also have an obligation to investigate harassment complaints. Failure to enforce anti-harassment policies can be very costly. In 1998, for example, Mitsubishi paid $34 million to more than three hundred fifty female employees of its Normal, Illinois, plant to settle a sexual harassment case supported by the Equal Employment Opportunity Commission. The EEOC reprimanded the company for permitting an atmosphere of verbal and physical abuse against women, charging that female workers had been subjected to various forms of harassment, ranging from exposure to obscene graffiti and vulgar jokes to fondling and groping (Grossman, 2012).

People must be hired, evaluated, promoted, and rewarded on the basis of merit, not personal characteristics. This, too, is the law—namely, Title VII of the 1964 Civil Rights Act. Like most companies, P&G has a formal policy on hiring and promotion that forbids discrimination based on race, color, religion, gender, age, national origin, citizenship, sexual orientation, or disability. P&G expects all employees to support its commitment to equal employment opportunity and warns that those who violate company policies will face strict disciplinary action, including termination of employment (Procter & Gamble, 2012).

Equal Pay and the Wage Gap

The Equal Pay Act of 1963 requires equal pay for both men and women in jobs that entail equal skill, equal effort, equal responsibility, or similar working conditions. What has been the effect of the law after forty years? In 1963, women earned, on average, $0.589 for every $1 earned by men. By 2010, that difference—which we call the wage gap—has been closed to $0.812 to $1, or approximately 81 percent (Aamodt, 2011). Figure 2.10 “Median Annual Earnings by Gender and Race” provides some interesting numbers on the differences in annual earnings based not only on gender but on race, as well. Figure 2.11 “Median Annual Earnings by Level of Education” throws further light on the wage and unemployment gap when education is taken into consideration. 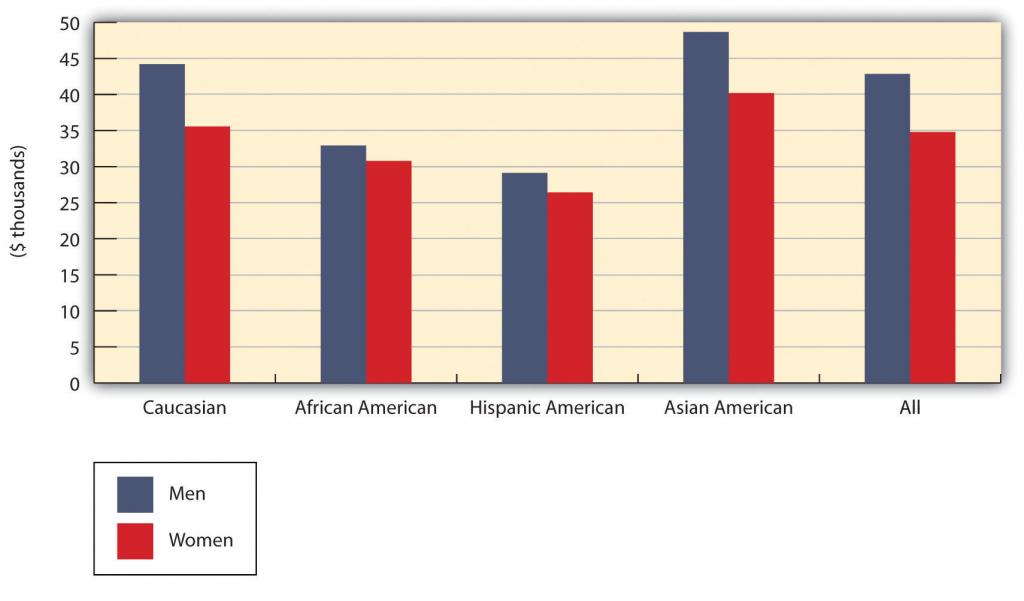 What accounts for the difference, despite the mandate of federal law? For one thing, the jobs typically held by women tend to pay less than those typically held by men. In addition, men often have better job opportunities. For example, a man newly hired at the same time as a woman will often get a higher-paying assignment at the entry level. Coupled with the fact that the same sort of discrimination applies when it comes to training and promotions, women are usually relegated to a lifetime of lower earnings.

Note: Data are 2010 annual averages for persons age 25 and over. Earnings are for full-time wage and salary workers.

In addition to complying with equal employment opportunity laws, many companies make special efforts to recruit employees who are underrepresented in the workforce according to sex, race, or some other characteristic. In helping to build more diverse workforces, such initiatives contribute to competitive advantage for two reasons: (1) People from diverse backgrounds bring new talents and fresh perspectives to an organization, typically enhancing creativity in the development of new products. (2) By reflecting more accurately the changing demographics of the marketplace, a diverse workforce improves a company’s ability to serve an ethnically diverse population.

At the very least, employers must obey laws governing minimum wage and overtime pay. A minimum wage is set by the federal government, though states can set their own rates. The current federal rate, for example, is $7.25, while the rate in the state of Washington is $8.67. When there’s a difference, the higher rate applies (U.S. Department of Labor, 2012). By law, employers must also provide certain benefits—social security (which provides retirement benefits), unemployment insurance (which protects against loss of income in case of job loss), and workers’ compensation (which covers lost wages and medical costs in case of on-the-job injury). Most large companies pay most of their workers more than minimum wage and offer considerably broader benefits, including medical, dental, and vision care, as well as pension benefits.