That might sound like a trite insight, but the theory of rational expectations has important implications for monetary policy. In a quest to understand why policymakers had such a poor record, especially during the 1970s, Len Mirman (University of Virginia),www.virginia.edu/economics/mirman.htm Robert Lucas (University of Chicago),home.uchicago.edu/~sogrodow Thomas Sargent (New York University),homepages.nyu.edu/~ts43 Bennett McCallum (Carnegie-Mellon),public.tepper.cmu.edu/facultydirectory/FacultyDirectoryProfile.aspx?ID=96 Edward Prescott (Arizona State),www.minneapolisfed.org/research/prescott and other economists of the so-called expectations revolution discovered that expansionary monetary policies cannot be effective if economic agents expect them to be implemented. Conversely, to thwart inflation as quickly and painlessly as possible, the central bank must be able to make a credible commitment to stop it. In other words, it must convince people that it can and will stop prices from rising.

The Continental Congress did not make a credible commitment to end inflation because its announcement did nothing to end its large and chronic budget deficit. It also did nothing to prevent the states from issuing more bills of credit.

Lucas was among the first to highlight the importance of public expectations in macroeconomic forecasting and policymaking. What matters, he argued, was not what policymakers’ models said would happen but what economic agents (people, firms, governments) believed would occur. So in one instance, a rise in the fed funds rate might cause long-term interest rates to barely budge, but in another it might cause them to soar. In short, policymakers can’t be certain of the effects of their policies before implementing them.

Because Keynesian cross diagrams and the IS-LM and AS-AD models did not explicitly take rational expectations into account, Lucas, Sargent, and others had to recast them in what is generally called the new classical macroeconomic model. That new model uses the AS, ASL, and AD curves but reduces the short run of aggregate demand shocks to zero if the policy is expected. So, for example, an anticipated EMP shifts AD right but immediately shifts AS left as workers spontaneously push for higher wages. The price level rises, but output doesn’t budge. An unanticipated EMP, by contrast, has the same effect as described in earlier chapters—a temporary (but who knows how long?) increase in output (and a rise in P followed by another when the AS curve eventually shifts left).

Now get this: Y* can actually decline if an EMP is not as expansionary as expected! If economic actors expect a big shift in AD, the AS curve will shift hard left to keep Y* at Ynrl, as in Figure 26.1 "The effect of an unexpectedly weak EMP". If the AD curve does not shift as far right as expected, or indeed if it stays put, prices will rise and output will fall, as in the following graph. This helps to explain why financial markets sometimes react badly to small decreases in the Fed’s fed funds target. They expected more!

Figure 26.1 The effect of an unexpectedly weak EMP 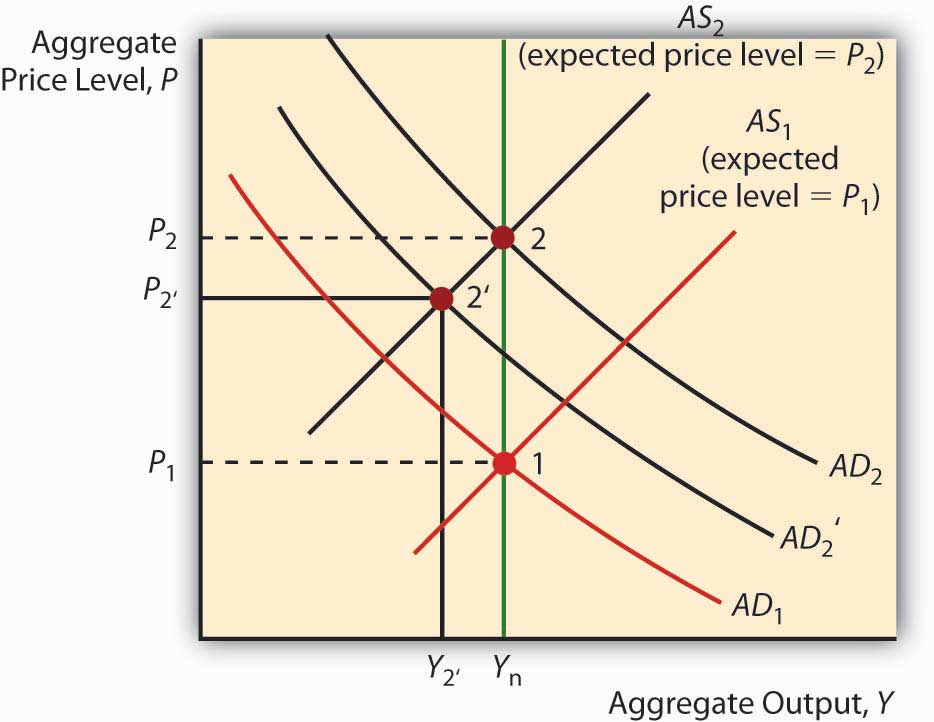