We can’t teach you how to predict future exchange rates because the markets are highly efficient (free floating exchange rates follow a random walk) and because many exchange rates are more or less heavily influenced by monetary authorities. Some countries try to maintain fixed exchange rates by pegging their respective currencies to gold or some other currency, like the U.S. dollar, euro, or Swiss franc. Many others allow exchange rates to float within a range or band, some of which are broader than others. Other countries allow the value of their currencies to freely float, determined solely by supply and demand. Nations that fix their exchange rates or engage in a so-called dirty float (within bands) find it necessary to make periodic adjustments to both the width and range of the bands over time. So trying to make a living predicting exchange rate changes is difficult indeed. That said, you should be able to post-dict why floating exchange rates changed or, in other words, to narrate plausible reasons why past changes, like those depicted in Figure 18.2 "How many USD did it take to buy 1 Canadian dollar?" and Figure 18.3 "How many Canadian dollars did it take to buy 1 USD?", may have occurred. (This is similar to what we did with interest rates.)

Figure 18.2 How many USD did it take to buy 1 Canadian dollar? 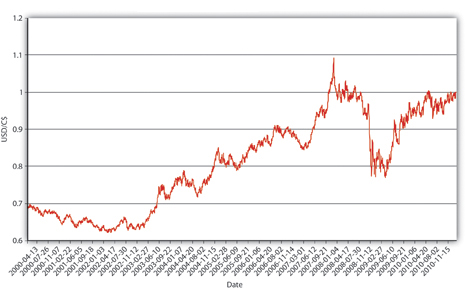 Figure 18.3 How many Canadian dollars did it take to buy 1 USD? 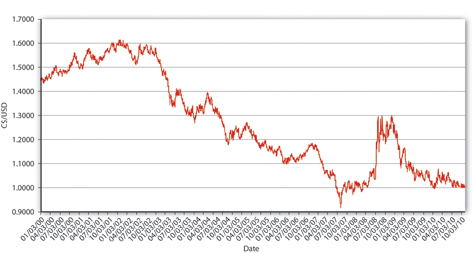 We’ll concentrate on the spot exchange rate, the price of one currency in terms of another today, and currencies that are allowed to float freely or at least within wide bands. The forward exchange rate, the price today of future exchanges of foreign currencies, is also important but follows the same general principles as the spot market. Both types of trading are conducted on a wholesale (large-scale) basis by a few score-big international banks in an over-the-counter (OTC) market. Investors and travelers can buy foreign currencies in a variety of ways, via everything from brokerage accounts to airport kiosks, to their credit cards. Retail purchasers give up more of their domestic currency to receive a given number of units of a foreign currency than the wholesale banks do. (To put the same idea another way, they receive fewer units of the foreign currency for each unit of their domestic currency.) That’s partly why the big banks are in the business. The big boys also try to earn profits via speculation, buying (selling) a currency when it is low (high), and selling (buying) it when it is high (low). (They also seek out arbitrage opportunities, but those are rare and fleeting.) Each day, over $1 trillion of wholesale-level ($1 million plus per transaction) foreign exchange transactions take place.

Before we go any further, a few words of caution. Students sometimes think that a strong currency is always better than a weak one. That undoubtedly stems from the fact that strong sounds good and weak sounds bad. As noted above, however, a strong (weak) currency is neither good nor bad but rather advantageous (disadvantageous) for imports/consumers and disadvantageous (advantageous) for exports/producers of exportable goods and services. Another thing: no need to thump your chest patriotically because it takes many units of foreign currencies to buy 1 USD. That would be like proclaiming that you are “hot” because your temperature is 98.6 degrees Fahrenheit instead of 37 degrees Centigrade (that’s the same temperature, measured two different ways) or that you are 175 centimeters tall instead of 68.9 inches (another equivalent). Most countries have a very small unit of account compared to the United States, that is all. Other countries, like Great Britain, have units of account that are larger than the USD, so it takes more than 1 USD to buy a unit of those currencies. The nominal level of the exchange rate in no way means that one country or economy is better than another. Changes in exchange rates, by contrast, have profound consequences, as we have seen. They also have profound causes.