Note that as a country’s central bank becomes more independent (as its independence score increases from 1 to 4), its average inflation rate drops. The negative relationship is quite pronounced, producing a correlation coefficient of −.7976. The correlation is so strong, in fact, that many believe that independence causes low inflation. (Correlation alone cannot establish causation, but a strong correlation coefficient is a necessary first step in establishing causation.) Some scholars have argued, however, that the results were rigged, that researchers simply assigned central banks with a good record on inflation with a high independence score. (If this is true, it would destroy the causal implications of the study.) While it is true that rating a central bank’s independence is something of an art, there are clear rules to follow. Where there is no rule of law, as in dictatorships, there can be no independence. The central banker must do as he or she is instructed or be sacked or possibly shot. Little wonder, then, that many Latin American and African countries had very high rates of inflation when they were ruled by dictators. 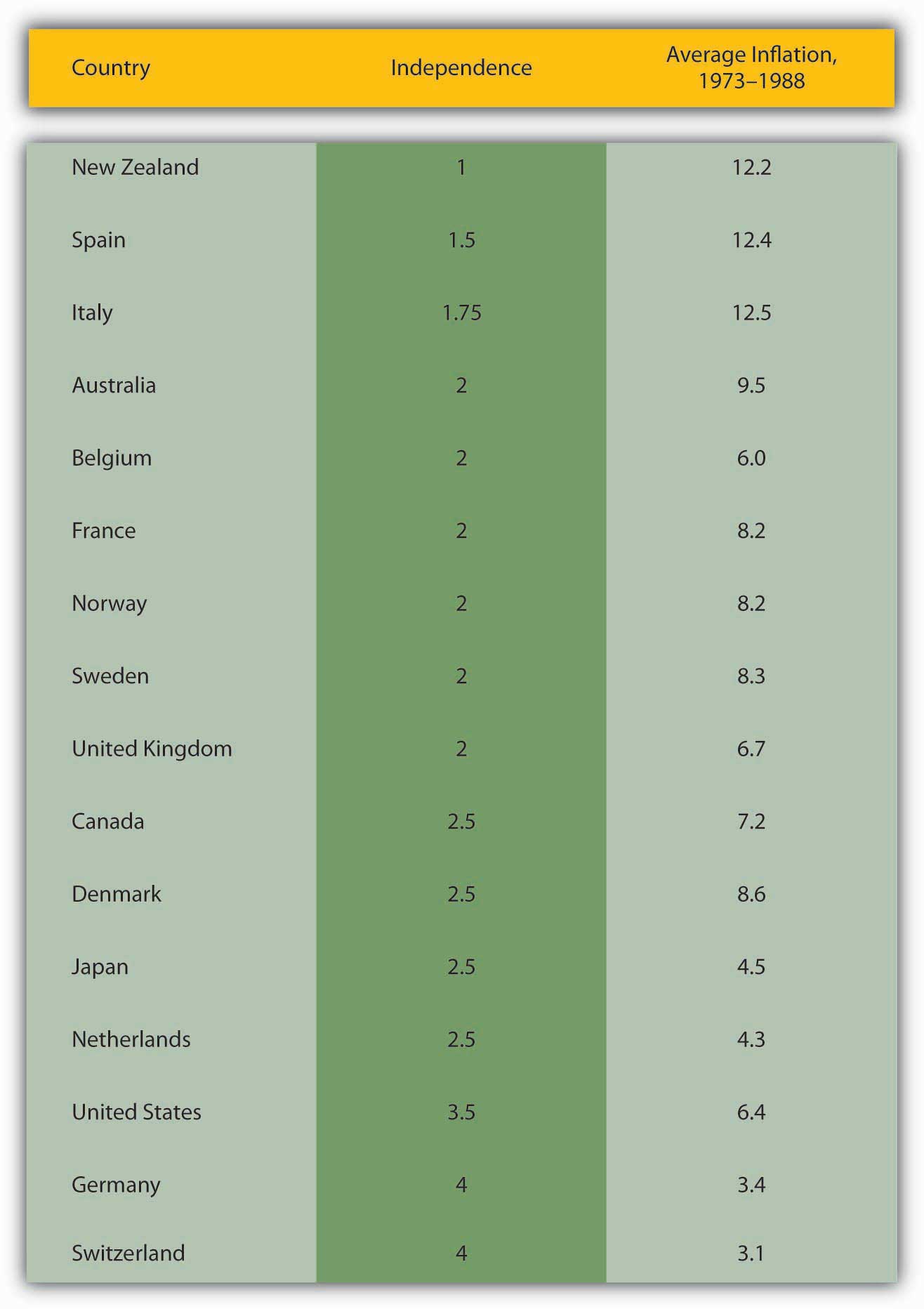 In nations with rule of law, like those in Figure 14.2 "Central bank independence and inflation", it’s best to follow the purse. If a central bank has control of its own budget, as the Fed and ECB (and some of its predecessors, like the Bundesbank of Germany) do, then the bank is quite independent because it is beholden to no one. The Fed is slightly less independent than the ECB, however, because its existence is not constitutionally guaranteed. (Indeed, as we learned above, the United States had a nasty habit of dispatching its early central banks.) Congress could change or abolish the Fed simply by passing a law and getting the president to sign it or it could override his veto. The ECB, by contrast, was formed by an international treaty, changes to which must be ratified by all the signatories, a chore and a half to achieve, to be sure! Finally, central banks led by people who are appointed are more independent than those led by popularly elected officials. Long, nonrenewable terms are better for independence than short, renewable ones, which tend to induce bankers to curry the favor of whoever decides their fate when their term expires.

None of this is to say, however, that determining a central bank’s independence is easy, particularly when de jure and de facto realities differ. The Bank of Canada’s independence is limited by the fact that the Bank Act of 1967 made the government ultimately responsible for Canada’s monetary policy. But, in fact, the Canadian government has allowed its central bank to run the money show. The same could be said of the Bank of England. The Bank of Japan’s independence was strengthened in 1998 but the Ministry of Finance, a government agency, still controls part of its budget and can request delays in monetary policy decisions. The current de facto independence of those banks could be undermined and quite quickly at that.

“Bank of Japan Faces Test of Independence,” Wall Street Journal, August 10, 2000.“The political storm over a possible interest rate increase by the Bank of Japan is shaping up to be the biggest challenge to the central bank’s independence since it gained autonomy two years ago. Members of the ruling Liberal Democratic Party stepped up pressure on the bank to leave the country’s interest rates where they are now.” Why does the Liberal Democratic Party (LDP) want to influence the Bank of Japan’s (BoJ’s) interest rate policy? Why was the issue important enough to warrant a major article in a major business newspaper?

The LDP wanted to influence the BoJ’s interest rate policy for political reasons, namely, to keep the economy from slowing, a potential threat to its rule. This was an important story because the de facto “independence” of the BoJ was at stake and hence the market’s perception of the Japanese central bank’s ability to raise interest rates to stop inflation in the face of political pressure.

Why, when left to their own devices, are central bankers tougher on inflation than governments, politicians, or the general populace? Partly because they represent bank, business, and creditor interests, all of which are hurt if prices rise quickly and unexpectedly. Banks are naturally uncomfortable in rising interest rate environments, and inflation invariably brings with it higher rates. Net creditors—economic entities that are owed more than they owe—also dislike inflation because it erodes the real value of the money owed them. Finally, businesses tend to dislike inflation because it increases uncertainty and makes long-term planning difficult. Central bankers also know the damage that inflation can do to an economy, so a public interest motivation drives them as well.

People and the politicians they elect to office, on the other hand, sometimes desire inflation. Many households are net debtors, meaning that they owe more money than is owed to them. Inflation, they know, will decrease the real burden of their debts. In addition, most members of the public do not want the higher interest rates that are sometimes necessary to combat inflation because it will cost them money and perhaps even their jobs. They would rather suffer from some inflation, in other words, rather than deal with the pain of keeping prices in check.

Politicians know voter preferences, so they, too, tend to err on the side of higher rather than lower inflation. Politicians also know that monetary stimulus—increasing the money supply at a faster rate than usual or lowering the interest rate—can stimulate a short burst of economic growth that will make people happy with the status quo and ready to return incumbents to office. If inflation ensues and the economy turns sour for awhile after the election, that is okay because matters will likely sort out before the next election, when politicians will be again inclined to pump out money. Some evidence of just such a political business cycle in the postwar United States has been found.See, for example, Jac Heckelman, “Historical Political Business Cycles in the United States,” EH.Net Encyclopedia (2001). eh.net/encyclopedia/article/heckelman .political.business.cycles. The clearest evidence implicates Richard Nixon. See Burton Abrams and James Butkiewicz, “The Political Business cycle: New Evidence from the Nixon Tapes,” University of Delaware Working Paper Series No. 2011-05 (2011). www.lerner.udel.edu/sites/default/files/imce/economics/Working Papers/2011/UDWP 2011-05.pdf Politicians might also want to print money simply to avoid raising direct taxes. The resultant inflation acts like a tax on cash balances (which lose value each day) and blame can be cast on the central bankers.

All in all, then, it is a good idea to have a central bank with a good deal of independence, though some liberals complain that independent central banks aren’t sufficiently “democratic.” But who says everything should be democratic? Would you want the armed forces run by majority vote? Your company? Your household? Have you heard about the tyranny of the majority?xroads.virginia.edu/~hyper/detoc/1_ch15.htm That’s when two wolves and a sheep vote on what’s for dinner. Central bank independence is not just about inflation but about how well the overall economy performs. There is no indication that the inflation fighting done by independent central banks in any way harms economic growth or employment in the long run. Keeping the lid on inflation, which can seriously injure national economies, is therefore a very good policy indeed.

Another knock against independent central banks is that they are not very transparent. The Fed, for example, has long been infamous for its secrecy. When forced by law to disclose more information about its actions sooner, it turned to obfuscation. To this day, decoding the FOMC’s press releases is an interesting game of semantics. For all its unclear language, the Fed is more open than the ECB, which will not make the minutes of its policy meetings public until twenty years after they take place. It is less transparent, however, than many central banks that publish their economic forecasts and inflation rate targets. Theory suggests that central banks should be transparent when trying to stop inflation but opaque when trying to stimulate the economy.