The S&L crisis and the failure of a few big commercial banks induced a series of regulatory reforms in the United States. The first such act, the Financial Institutions Reform, Recovery, and Enforcement Act (FIRREA), became law in August 1989. That act canned the old S&L regulators, created new regulatory agencies, and bailed out the bankrupt insurance fund. In the end, U.S. taxpayers reimbursed depositors at the failed S&Ls. FIRREA also re-regulated S&Ls, increasing their capital requirements and imposing the same risk-based capital standards that commercial banks are subject to. Since passage of the act, many S&Ls have converted to commercial banks and few new S&Ls have been formed.

In 1991, the government enacted further reforms in the Federal Deposit Insurance Corporation Improvement Act (FDICIA), which continued the bailout of the S&Ls and the deposit insurance fund, raised deposit insurance premiums, and forced the FDIC to close failed banks using the least costly method. (Failed banks can be dismembered and their pieces sold off one by one. That often entails selling assets at a discount. Or an entire bank can be sold to a healthy bank, which, of course, wants a little sugar [read, “cash”] to induce it to embrace a zombie!) The act also forced the FDIC to charge risk-based insurance premiums instead of a flat fee. The system it developed, however, resulted in 90 percent of banks, accounting for 95 percent of all deposits, paying the same premium. The original idea of taxing risky banks and rewarding safe ones was therefore subverted.

FDICIA’s crowning glory is that it requires regulators to intervene earlier and more stridently when banks first get into trouble, well before losses eat away their capital. The idea is to close banks before they go broke, and certainly before they arise from the dead. See Figure 11.4 "Regulation of bank capitalization" for details. Of course, banks can go under, have gone under, in a matter of hours, well before regulators can act or even know what is happening. Regulators do not and, of course, cannot monitor banks 24/7/365. And despite the law, regulators might still forbear, just like your neighbor might still smoke pot, even though it’s illegal. 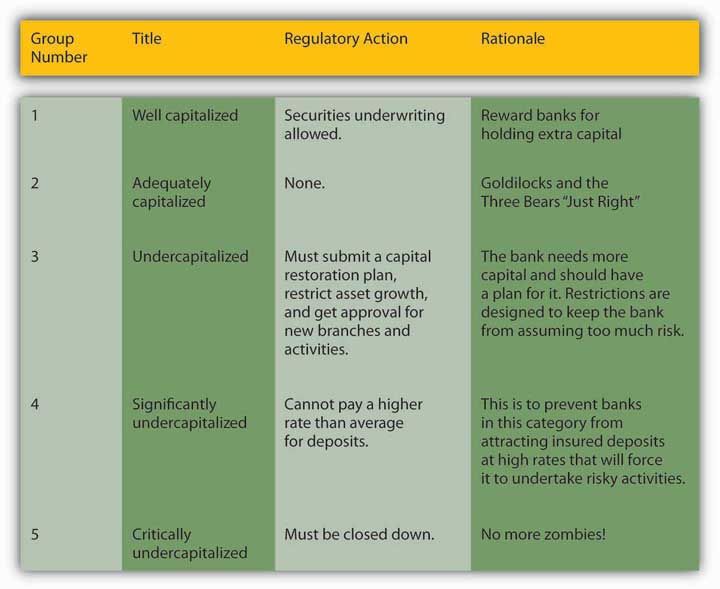 The other problem with FDICIA is that it weakened but ultimately maintained the too-big-to-fail (TBTF) policy. Regulators cooked up TBTF during the 1980s to justify bailing out a big shaky bank called Continental Illinois. Like deposit insurance, TBTF was ostensibly a noble notion. If a really big bank failed and owed large sums to lots of other banks and nonbank financial institutions, it could cause a domino effect that could topple numerous companies very quickly. That, in turn, would cause asymmetric information and uncertainty to rise, risk premia on bonds to jump, stock prices to fall…you get the picture.If not, read an article that influenced policymakers: Ben Bernanke, “Nonmonetary Effects of the Financial Crisis in the Propagation of the Great Depression,” American Economic Review 73 (June 1983): 257–76.The problem is that if a bank thinks it is too big to be allowed to fail, it has an incentive to take on a lot of risk, confident that the government will have its back if it gets into trouble. (Banks in this respect are little different from drunken frat boys, or so I’ve heard.) Financier Henry Kaufman has termed this problem the Bigness DilemmaThe dilemma is that big banks in other regards are stabilizing rather than destabilizing because they have clearly achieved efficient scale and maintain a diversified portfolio of assets. and long feared that it could lead to a catastrophic economic meltdown, a political crisis, or a major economic slump. His fears came to fruition during the financial crisis of 2007–2008, of which we will learn more in another chapter. Similarly some analysts believe that Japan’s TBTF policy was a leading cause of its recent fifteen-year economic funk. So like most other regulations, TBTF imposes costs that may exceed its benefits, depending on the details of how each are tallied. Such tallies, unfortunately, are often suffused with partisan ideological assumptions.

In 1994, the Riegle-Neal Interstate Banking and Branching Efficiency Act finally overturned most prohibitions on interstate banking. That law led to considerable consolidation, the effects of which are still unclear. Nevertheless, the act was long overdue, as was the Gramm-Leach-Bliley Financial Services Modernization Act of 1999, which repealed Glass-Steagall, allowing the same institutions to engage in both commercial and investment banking activities. The act has led to some conglomeration, but not as much as many observers expected. Again, it may be some time before the overall effects of the reform become clear. So far, both acts appear to have strengthened the financial system by making banks more profitable and diversified. Some large complex banking organizations and large complex financial institutions (LCBOs and LCFIs, respectively) have held up well in the face of the subprime mortgage crisis, but others went bankrupt. The recent crisis appears to have been rooted in more fundamental issues, like TBTF and a dearth of internal incentive alignment within financial institutions, big and small, than in the regulatory reforms of the 1990s.