To study this phenomenon more closely, economists and market watchers use a tool called a yield curve, which is basically a snapshot of yields of bonds of different maturities at a given moment. Figure 6.6 "Treasury yield curve" is what the Treasury yield curve looks like as reported by Reuters. The current yield curve can also be viewed many places online, including Bloomberg, the Wall Street Journal, and the U.S. Treasury itself.www.bloomberg.com/markets/rates/index.html;www.ustreas.gov/offices/domestic-finance/debt-management/interest-rate/yield.shtml What observers have discovered is that the yields of bonds of different maturities (but identical risk structures) tend to move in tandem. They also note that yield curves usually slope upward. In other words, short-term rates are usually lower than long-term rates. Sometimes, however, the yield “curve” is actually flat—yields for bonds of different maturities are identical, or nearly so. Sometimes, particularly when short-term rates are higher than normal, the curve inverts or slopes downward, indicating that the yield on short-term bonds is higher than that on long-term bonds. And sometimes the curve goes up and down, resembling a sideways S (sometimes tilted on its face and sometimes its back) or Z. What explains this? (Remember, it can’t be tax, default, or liquidity risk because those variables are all the same for Treasuries.)

Theory and empirical evidence both point to the same conclusion: bonds of different maturities are partial substitutes for each other, not perfect substitutes, but not completely segmented either. Generally, investors prefer short-term bonds to long-term ones, but they reverse their preference if the interest rate goes unusually high. Investors are willing to pay more for short-term bonds, other factors (like “the” interest rate and the risk structure) held constant, because longer-term bonds are more subject to interest rate risk. Or, to put it another way, investors need a premium (in the form of a lower price or higher yield) to hold long-term bonds. (This notion has been called liquidity preference because it stresses that investors prefer shorter-term or more liquid bonds.) Ergo, the yield curve usually slopes upward, as it does in Figure 6.6 "Treasury yield curve". 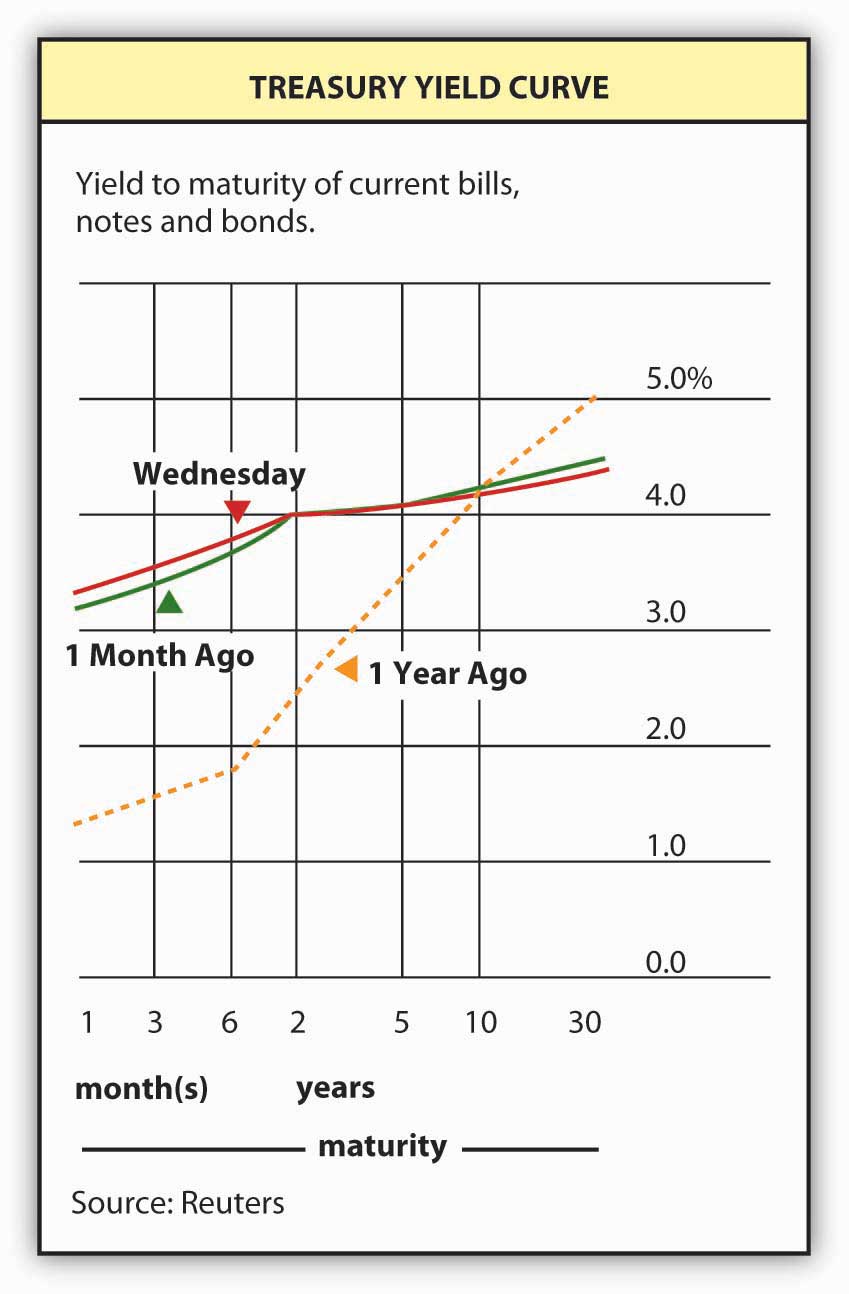 But what about those times when the curve is flat or inverted? Investors give up their preference for short-term bonds when they expect a high interest rate for a short period. (This idea has been called preferred habitat because it suggests that short and long term bonds are, to some extent, substitutes, and whichever is preferred can change under the right circumstances or in the right habitat.) Investors can think of a long-term bond yield as the average of the yields on shorter-term obligations, so when the interest rate is high by historical norms but expected after a year or so to revert to some long-term mean, they will actually begin to prefer long-term bonds and will buy them at much higher prices (lower yields) than short-term bonds, which is in anticipation of relatively large price increases in long-term bonds when interest rates decrease. More formally, investors believe that

So the yield today of a bond with 5 years to maturity, if the liquidity premium is .5 percent and the expected interest rate each year is 4, is 4.5:

If the interest rate is expected to rise over the next 5 years, the yield curve slopes upward yet more steeply:

If, on the other hand, interest rates are expected to fall over the next 5 years, the yield curve will slope downward, as in this example:

Investors may also realize that long-term bonds will increase in price when interest rates fall (as they are expected to do in this example and as we learned in Chapter 3 "Money"), so they are willing to pay more for them now.

In the nineteenth century, the yield curve was usually flat under normal conditions. (It inverted during financial panics.) In other words, short-term and long-term bonds issued by the same economic entity did not often differ much in price. Why might that have been?

One possibility is that there was no liquidity premium then. Then, as now, short-term bonds suffered less interest rate risk than long-term bonds, but investors often complained of extremely high levels of reinvestment risk, of their inability to easily and cheaply reinvest the principal of bonds and mortgages when they were repaid. Often, lenders urged good borrowers not to repay (but to continue to service their obligations, of course). Another not mutually exclusive possibility is that the long-term price level stability engendered by the specie standard made the interest rate less volatile. The expectation was that the interest rate would not long stray from its long-term tendency.

Empirical research suggests that the yield curve is a good predictor of future interest rates in the very short term, the next few months, and the long term, but not in between. Part of the difficulty is that ρn is not well understood nor is it easily observable. It may change over time and/or not increase much from one maturity to the next on the short end of the curve. Nevertheless, economic forecasters use the yield curve to make predictions about inflation and the business cycle. A flat or inverted curve, for instance, portends lower short-term interest rates in the future, which is consistent with a recession but also with lower inflation rates, as we learned in Chapter 5 "The Economics of Interest-Rate Fluctuations". A curve sloped steeply upward, by contrast, portends higher future interest rates, which might be brought about by an increase in inflation rates or an economic boom.

Time once again to ensure that we’re on the same page, er, Web site.