You might well ask at this point, What factors change interest rates? One big factor is inflation. As the price level rises, so too do interest rates, or at least what economists call nominal interest rates, the type of rates we’ve discussed so far. If nominal rates do not increase (and they often don’t, or can’t), lenders might receive more nominal dollars than they lent but actually get back less purchasing power. Imagine, for example, that you lent $100 for one year at 6 percent interest when a loaf of bread, pack of chewing gum, and two-liter bottle of Mountain Dew each cost $1. At the end of the simple loan, you would get back $100 × 1.06 = $106 and be able to enjoy an extra $6 of goods, say, two loaves of bread, two packs of gum, and two bottles of the caffeine and sugar rush known as Doin’ the Dew. But what if prices doubled over that year? Instead of some combination of 106 goodies, you’d be able to buy only fifty-three. Your nominal return would be positive, but your real return, what you could actually buy with the $106, would be steeply negative.

A simple equation, the Fisher Equation, named after Irving Fisher, the early twentieth-century U.S. economist who articulated it,To be frank, Benjamin Franklin and other colonists in eighteenth-century America understood it well.helps us to understand the relationship between inflation and interest rates more precisely: 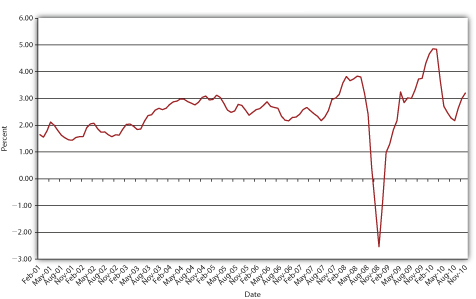 In early 2007, a man had a wallet returned that he had lost over sixty years earlier in France, during World War II.ABC News video, “Wallet Returned, 60 Years Later, A World War II Veteran gets his wallet returned to him sixty years later” (1/9/2007). In addition to his original Social Security card and a picture of his parents, the man received an unspecified sum of cash. Was losing the wallet a good investment? Why or why not?