Some regulations are clearly salubrious and should be retained. The main justifications for financial system regulation—market failures—do occur, and government regulations can, and sometimes have, helped to mitigate them. Like everything else in life, however, regulations are costly (not gratis) and hence entail trade-offs. As detailed in another chapter, they induce perfectly legal but bureaucratically disruptive loophole mining and lobbying activities. They can also lead to severely twisted, unintended consequences, like banks purposely making bad loans.

The goal of this chapter is not to bash all regulation but rather to critique specific financial regulations in the hopes of creating better regulatory policies in the (hopefully near) future. The place to start, I believe, is to think about what regulators and regulations cannot do, and that is fix the world by decree. Simply making an activity illegal does not mean that it will stop. Because the government faces a budget constraint and opportunity costs, it can’t afford to monitor everyone all the time. What’s bad for some is often good for others, so many people willingly supply illegal goods or activities. As a result, many illegal activities are commonplace; in no particular order, sodomy, drug use, reckless use of automobiles, and music piracy come to mind. This may seem like a simple point, but many people believe that regulation can really work if only regulations, and the regulators charged with enforcing them, are strengthened. If regulations failed in the past, they believe that means regulators needed more money or authority, or both.

The problem with this view, however, is that government officials may not be the angels many people assume they are. It’s not their fault. Especially if they went through the U.S. public school system, they likely learned an interpretation of government called the public interest model. As its name suggests, the public interest model posits that government officials work in the interests of the public, of “the people,” if you will. It’s the sort of thing Abraham Lincoln had in mind in his famous Gettysburg Address when he said “that government of the people, by the people, for the people, shall not perish from the earth.”showcase.netins.net/web/creative/lincoln/speeches/gettysburg.htm That’s outstanding political rhetoric, better than anything current spin artists concoct, but is it a fair representation of reality?

Many economists think not. They believe that private interest prevails, even in the government. According to their model, called the public choice or, less confusingly, the private interest model, politicians and bureaucrats often behave in their own interests rather than those of the public. Of course, they don’t go around saying that we need law X or regulation Y to help me to get rich via bribes, to bailout my brother-in-law, or to ensure that I soon receive a cushy job in the private sector. Rather, they say that we need law X or regulation Y to protect widows and orphans, to stymie the efforts of bad guys, or to make the rich pay for their success.

In many countries, the ones we will call “predatory” in the context of the Growth Diamond model, the private interest model clearly holds sway. In rich countries, the public interest model becomes more plausible. Nevertheless, many economic regulations, though clothed in public interest rhetoric, appear on close inspection to conform to the private interest model. As University of Chicago economist and Nobel Laureate George Stiglerwww.econlib.org/LIBRARY/Enc/bios/Stigler.htmlpointed out decades ago, regulators are often “captured”en.wikipedia.org/wiki/Regulatory_captureby the industry they regulate. In other words, the industry establishes regulations for itself by influencing the decisions of regulators. Financial regulators, as we’ll see, are no exception.

Regardless of regulators’ and politicians’ motivations, another very sticky question arises: could regulators stop bad activities, events, and people even if they wanted to? The answer in many contexts appears to be an unequivocal “No!” The reason is our old nemesis, asymmetric information, which, readers should recall, inheres in nature and pervades all. It flummoxes governments as much as markets and intermediaries. The implications of this insight are devastating for the effectiveness of regulators and their regulations, as Figure 11.1 "Asymmetric information and regulation" makes clear. 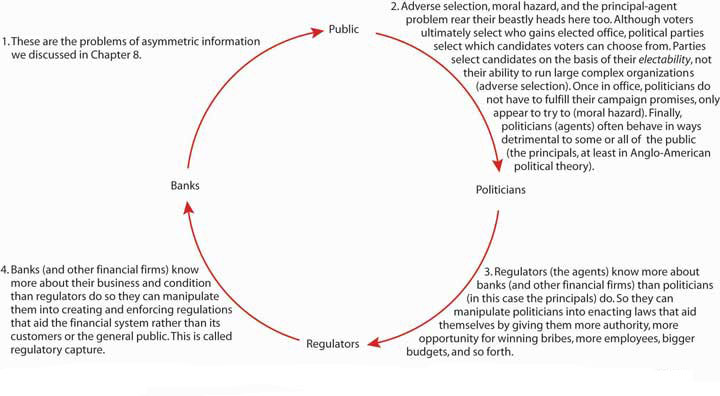 Although Figure 11.1 "Asymmetric information and regulation" is esthetically pleasing (great job, guys!) it does not paint a pretty picture. Due to multiple levels of nearly intractable problems of asymmetric information, democracy is no guarantee that government will serve the public interest. Matters are even worse in societies still plagued by predatory government, where corruption further fouls up the works by giving politicians, regulators, and bankers (and other financiers) incentives to perpetuate the current system, no matter how suboptimal it may be from the public’s point of view.

And if you really want to get your head spinning, consider this: agency problems within the government, within regulatory bureaucracies, and within banks abound. Within banks, traders and loan officers want to keep their jobs, earn promotions, and bring home large bonuses. They can do the latter two by taking large risks, and sometimes they choose to do so. Sometimes shareholders want to take on much larger risks than managers or depositors or other debt holders do. Sometimes it’s the managers who have incentives to place big bets, to get their stock options “in the money.”www.investorwords.com/2580/in_the_money.html Within bureaucracies, regulators have incentives to hide their mistakes and to take credit for good outcomes, even if they had little or nothing to do with them. The same is true for the government, where the legislature may try to discredit the executive’s policies, or vice versa, and withhold information or even spread disinformation to “prove” its case.

In the 1910s and early 1920s, a majority of U.S. states passed securities regulations called Blue Sky Laws that ostensibly sought to prevent slimy securities dealers from selling nothing but the blue sky to poor, defenseless widows and orphans. Can you figure out what was really going on? (Hint: Recall that this was a period of traditional banking, unit banks, the 3-6-3 rule, and all that. Recall, too, that securities markets are an alternative method of linking investors to borrowers.)

We probably gave it away with that last hint. Blue Sky Laws, scholars now realize, were veiled attempts to protect the monopolies of unit bankers upset about losing business to the securities markets. Unable to garner public sympathy for their plight, the bankers instead spoke in terms of public interest, of defrauded widows and orphans. There were certainly some scams about, but not enough to warrant the more virulent Blue Sky Laws, which actually gave state officials the power to forbid issuance of securities they didn’t like, and in some states, that was most of them!

It’s okay if you feel a bit uneasy with these new ideas. I think that as adults you can handle straight talk. It’ll be better for everyone—you, me, our children and grandchildren—if you learn to look at the government’s actions with a critical eye. Regulators have failed in the past and will do so again unless we align the interests of all the major parties depicted in Figure 11.1 "Asymmetric information and regulation" more closely, empowering market forces to do most of the heavy lifting.