The comparison of two independent population means is very common and provides a way to test the hypothesis that the two groups differ from each other. Is the night shift less productive than the day shift, are the rates of return from fixed asset investments different from those from common stock investments, and so on? An observed difference between two sample means depends on both the means and the sample standard deviations. Very different means can occur by chance if there is great variation among the individual samples. The test statistic will have to account for this fact. The test comparing two independent population means with unknown and possibly unequal population standard deviations is called the Aspin-Welch \(t\)-test. The degrees of freedom formula we will see later was developed by Aspin-Welch. 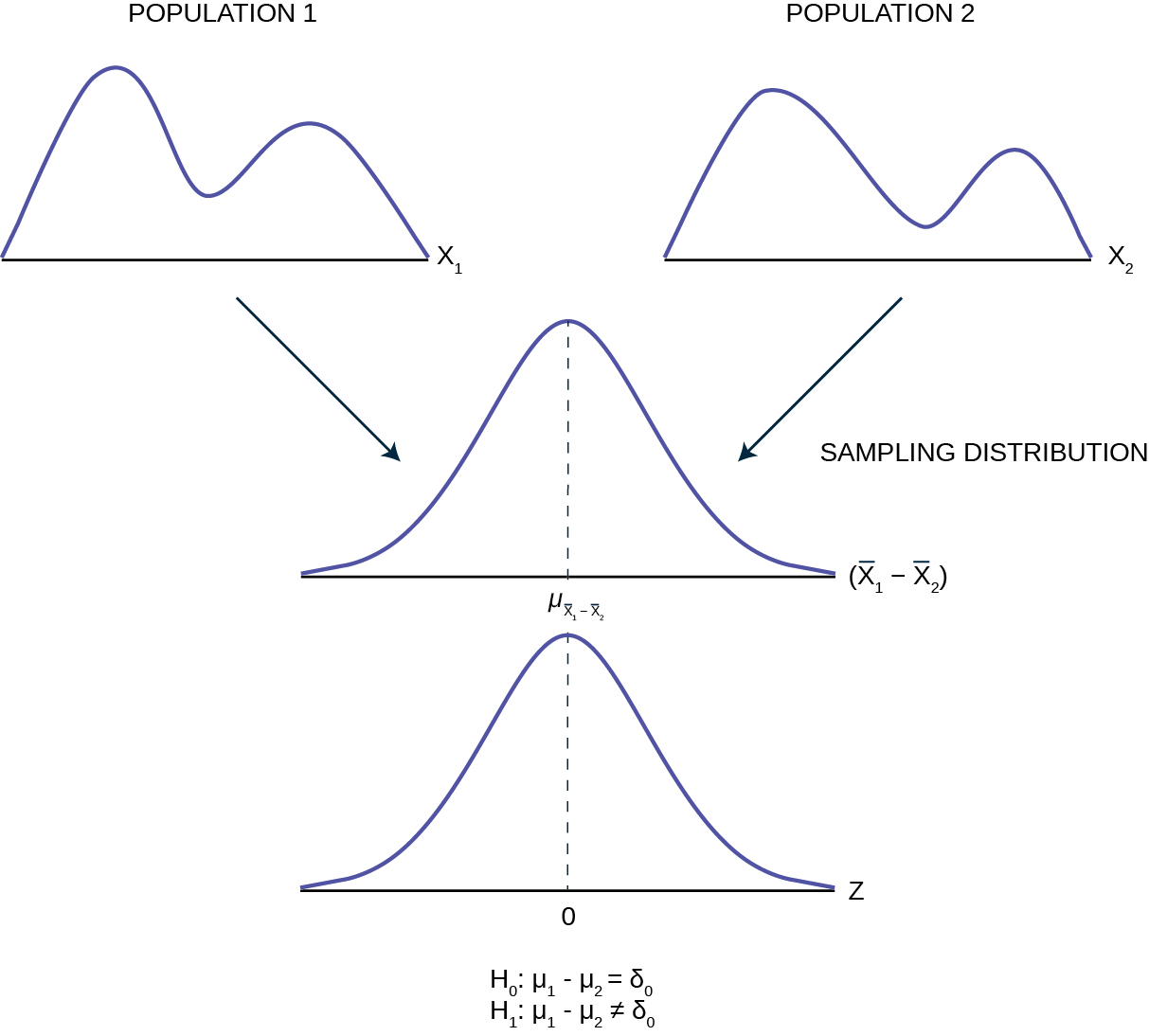 The Central Limit Theorem, as before, provides us with the standard deviation of the sampling distribution, and further, that the expected value of the mean of the distribution of differences in sample means is equal to the differences in the population means. Mathematically this can be stated:

The number of degrees of freedom (df) requires a somewhat complicated calculation. The \(df\) are not always a whole number. The test statistic above is approximated by the Student's \(t\)-distribution with \(df\) as follows:

An example of when \(\delta_{0}\) might not be zero is when the comparison of the two groups requires a specific difference for the decision to be meaningful. Imagine that you are making a capital investment. You are considering changing from your current model machine to another. You measure the productivity of your machines by the speed they produce the product. It may be that a contender to replace the old model is faster in terms of product throughput, but is also more expensive. The second machine may also have more maintenance costs, setup costs, etc. The null hypothesis would be set up so that the new machine would have to be better than the old one by enough to cover these extra costs in terms of speed and cost of production. This form of the null and alternative hypothesis shows how valuable this particular hypothesis test can be. For most of our work we will be testing simple hypotheses asking if there is any difference between the two distribution means.

The Kona Iki Corporation produces coconut milk. They take coconuts and extract the milk inside by drilling a hole and pouring the milk into a vat for processing. They have both a day shift (called the B shift) and a night shift (called the G shift) to do this part of the process. They would like to know if the day shift and the night shift are equally efficient in processing the coconuts. A study is done sampling 9 shifts of the G shift and 16 shifts of the B shift. The results of the number of hours required to process 100 pounds of coconuts is presented in Table \(\PageIndex{1}\). A study is done and data are collected, resulting in the data in Table \(\PageIndex{1}\).

Is there a difference in the mean amount of time for each shift to process 100 pounds of coconuts? Test at the 5% level of significance.

Distribution for the test: Use \(t_{df}\) where \(df\) is calculated using the \(df\) formula for independent groups, two population means above. Using a calculator, \(df\) is approximately 18.8462. 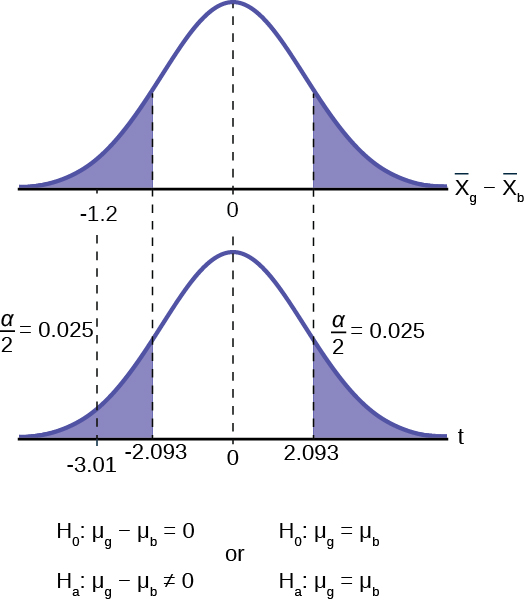 Make a decision: Since the calculated \(t\)-value is in the tail we cannot accept the null hypothesis that there is no difference between the two groups. The means are different.

a. Is this a test of two means or two proportions?

a. two means because time is a continuous random variable.

b. Are the populations standard deviations known or unknown?

c. Which distribution do you use to perform the test?

d. What is the random variable?

e. What are the null and alternate hypotheses? g. What is the value of the test statistic?

h. Can you accept/reject the null hypothesis?

i. At the 1% level of significance, from the sample data, there is not sufficient evidence to conclude that the retention of workers at Company A is longer than Company B, on average.

An interesting research question is the effect, if any, that different types of teaching formats have on the grade outcomes of students. To investigate this issue one sample of students' grades was taken from a hybrid class and another sample taken from a standard lecture format class. Both classes were for the same subject. The mean course grade in percent for the 35 hybrid students is 74 with a standard deviation of 16. The mean grades of the 40 students form the standard lecture class was 76 percent with a standard deviation of 9. Test at 5% to see if there is any significant difference in the population mean grades between standard lecture course and hybrid class.

We begin by noting that we have two groups, students from a hybrid class and students from a standard lecture format class. We also note that the random variable, what we are interested in, is students' grades, a continuous random variable. We could have asked the research question in a different way and had a binary random variable. For example, we could have studied the percentage of students with a failing grade, or with an A grade. Both of these would be binary and thus a test of proportions and not a test of means as is the case here. Finally, there is no presumption as to which format might lead to higher grades so the hypothesis is stated as a two-tailed test.

As would virtually always be the case, we do not know the population variances of the two distributions and thus our test statistic is:

To determine the critical value of the Student's t we need the degrees of freedom. For this case we use: \(df = n_1 + n_2 - 2 = 35 + 40 -2 = 73\). This is large enough to consider it the normal distribution thus \(t_{\alpha /2} = 1.96\). Again as always we determine if the calculated value is in the tail determined by the critical value. In this case we do not even need to look up the critical value: the calculated value of the difference in these two average grades is not even one standard deviation apart. Certainly not in the tail.

Conclusion: Cannot reject the null at \(\bf{\alpha = 5\%}\). Therefore, evidence does not exist to prove that the grades in hybrid and standard classes differ.