A code of ethics, also known as a code of conduct or statement of values, is a policy statement of a company’s values, responsibilities, and conduct expectations. The purpose of a code of ethics is to guide employees in handling ethical dilemmas. It is essentially a moral compass.

The ethical lapses of global companies, such as Enron, Arthur Andersen, and WorldCom, over the span of a few years caused much devastation. Enron and WorldCom executives used deceptive accounting and sold inflated stock while recommending it to employees and external investors. Arthur Andersen’s accountants, who audited Enron and WorldCom, turned a blind eye to the fraud. As a result, in 2002, Congress passed the Sarbanes-Oxley Act, which requires that companies listed or applying to be listed on a public stock exchange establish and enforce a code of ethics. It also requires that any changes to an established code of ethics be disclosed to the public. A code of ethics that meets the requirements of the act comprises the standards necessary to promote “honest and ethical conduct; full, fair, accurate, timely and understandable disclosure in periodic reports” and “compliance with applicable governmental rules and regulations.”[1]

Codes of ethics vary in content, length, and complexity. Johnson & Johnson has a relatively simple code of conduct, with just four paragraphs that can be summarized as: Our customers are our first priority, then our employees, then our communities. Stockholders come last. But if we take care of the others, then stockholders will do well.[2] Without being too detailed or lengthy, this credo expresses the company’s values and gives employees the guidance they need to make ethical decisions.

Having codes and policies in place that address ethics is not enough. Employees need to be taught how to respond in situations involving ethics. Therefore, many managers enroll their employees in an ethics training program. Ethics programs often involve activities that encourage ethical behavior and reinforce a company’s ethics code/policies.

One ethics activity involves having employees match various scenarios on one set of cards with the possible responses on another set of cards. Every scenario will have appropriate and inappropriate answers. After the participants match scenarios with responses, the group discusses the decision. Discussing the responses gives managers the opportunity to explain why some policies are in place and demonstrate how employees should respond in ethical situations they will likely face on the job.

Although it is important, or even required in some cases, to have an established and effective code of ethics, it is crucial to the stability of a company to first hire ethical employees. It is better to hire someone who is naturally inclined to behave in an ethical manner than to rely on a company code of ethics to encourage an unethical employee to make ethical choices.

One method of selecting and hiring ethical employees is the use of personality tests or situation-specific questionnaires. Personality tests can be used to determine temperament, outlook (i.e., whether positive or negative), and mood. Situation-specific questionnaires can be customized by a company and used to uncover how a candidate would react when faced with an ethical dilemma.

Calling personal references may also help hiring managers filter out less ethical candidates. Although this method is used often, it is important to be aware that references often withhold negative information about a candidate. Managers should supplement references with another method of weeding out dishonest candidates.

Best practices in the selection and hiring of ethical employees involve including the company’s most ethical employees in the interview process. Interviewers already doing the job a candidate is applying for can ask relevant questions that can lead to answers that reveal a lot about the candidate, such as a propensity to make unethical decisions.

One of the best enforcement tools is a whistleblower hotline, which is a phone number or other method for employees or other stakeholders to report suspected acts of impropriety, such as fraud, waste, abuse, misconduct, or violations of policy, laws, or regulations. These reports are usually confidential and may be anonymous. Colleagues often see suspicious behavior and are well-positioned to report it or fix it. However, some employees are reluctant to speak up for fear of retaliation.[3]

A whistleblower is an individual such as an employee who reports the misconduct of someone in a position of authority in his or her own organization. In the past, whistleblowers had no protection from retaliation by those they reported—reporting a superior’s wrongdoings often required risking one’s livelihood. This discouraged employees from reporting offenses. 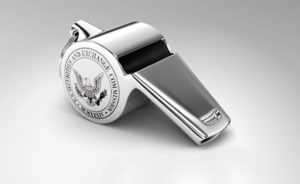 Under the whistleblower protection offered by the Sarbanes-Oxley Act, anyone who reports a corporate wrongdoing and believes he or she could be penalized for it can request that the Occupational Safety and Health Administration (OSHA) investigate the matter. If the whistleblower is an employee who was fired and the termination of employment was found to be improper, the company can be ordered to rehire the individual and give him or her back pay as well as a penalty award.

In 2017, OSHA ordered Wells Fargo to pay $5.4 million to a former manager who said he was fired in 2010 after reporting to his supervisors and to a bank ethics hotline what he suspected was fraudulent behavior. OSHA also said the bank must rehire him.

The $5.4 million, intended to cover back pay, compensatory damages, and legal fees, was the largest individual award ever ordered through OSHA’s whistleblower protection program at the time.[4]

Another agency, the Securities and Exchange Commission, also strengthened whistleblower protections and rewards. In 2011, the SEC issued new whistleblower rules, required by the Dodd-Frank Act. Under the new rules, a whistleblower is eligible for a bounty equal to 10 percent to 30 percent of monetary sanctions resulting from an enforcement action. Accordingly, companies will be faced with the prospect that their employees, suppliers, customers, consultants, advisors, and others may report possible violations directly to the SEC without providing the companies with an opportunity to first investigate the allegations and remediate any violations. Under the act, employers are prohibited from retaliating against whistleblowing employees.

The SEC announced the largest award ever in July 2017. Two whistleblowers are set to share a record $61 million award from the SEC for helping make the case that JPMorgan Chase & Co. failed to disclose to wealthy clients that it was steering them into investments that would be most profitable for the bank.[5]

Whistleblowing pays, and so does an ethics program that prevents the need for whistleblowers.

In addition to establishing a code of ethics, hiring ethical employees, and protecting whistleblowers, key aspects of senior management’s role in fostering ethical decisions and behavior in any organization include planning, implementing, and communicating the specifics of an ethics program. Ethics programs disclose important corporate values, often through the use of policies and employee/manager training. After a program has been implemented, senior management should monitor and evaluate it and then modify the program as needed or desired to ensure its effectiveness.

Ethics programs are like an insurance policy. They help mitigate the worst consequences when employees do stray, and they help prevent “accidents” by raising employee “safety” awareness.