Obviously, not all decisions prove to be good ones. Sometimes that is due to unfortunate situations that would have been impossible to foresee. Other times, however, the problem with the decision could have been avoided. What are the potential barriers that we should be aware of during the decision-making process?

Almost every decision is based at least in part on information that the decision maker trusts. The reliability and use of that information can potentially lead to multiple problems.

One of the most obvious information-related problems occurs when the information is either incorrect or incomplete. Trusting information that is faulty leads to many wrong deductions and conclusions. If information is incomplete, even if the decision maker is aware of that fact, uncertainty is introduced, and any decision based on that partial information could prove to be misguided.

On the other hand, a contrasting problem can arise when there is too much information available. An information overload can make it difficult to grasp the big picture and recognize which pieces of information are most important. Another problem it can create is that large sets of data may contain data that seems contradictory, leading the analyst to confusion or uncertainty and an inability to synthesize it as a whole.

A variety of difficulties can also arise from the circumstances in the midst of which a decision maker must work. One of the most common issues is stress, which can arise from a great number of sources. If the decision maker is experiencing abnormal levels of stress either in his personal life or work environment, that can often lead him to poor decisions that are out of character. He may be less objective or less disciplined in following the decision-making process he usually trusts. Recognizing high stress levels can provide the opportunity to intentionally protect against those tendencies.

Also, when time is a restricting factor, that often contributes to poor decisions. Unsurprisingly, evidence suggests that when decision makers feel rushed for time, their judgment often suffers. This is true even when there actually is sufficient time for the decision-making process: just the feeling of a lack of time causes problems. It is important to commit to taking sufficient time for decisions if at all possible (and it usually is). 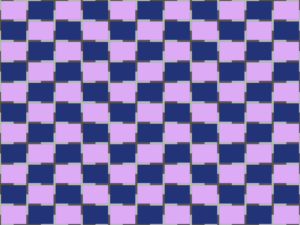 In this optical illusion all lines are parallel. Perceptual distortion makes them seem crooked.

Even when circumstances are conducive to good decisions and a sufficient supply of accurate information is available, there are still a number of ways in which decision makers might be at fault in their manner of judgment. For instance, their perception can be distorted. Understanding how this happens is relevant for managers because they make many decisions daily. They must also deal with many people making assessments and judgments.

Faulty ways of thinking during the analysis stage are often referred to as cognitive biases. A few common ones follow:

Framing bias is the tendency to be influenced by the way that a situation or problem is presented. Framing a message with a positive outcome has been shown to be more influential than framing a message with a negative outcome. For example, public health messages that depict nonsmokers as happy and popular with sparkling white smiles has proven more effective than displaying a smoker’s diseased lung. Numerous studies have demonstrated framing effects in our everyday lives.

It is important to be aware of this tendency because, depending on how a problem is presented, we might choose an alternative that is disadvantageous simply because of how it is framed.

Hindsight bias is the tendency to believe falsely that we would have accurately predicted the outcome of an event after that outcome is actually known. When something happens and we have accurate feedback on the outcome, we appear to be very good at concluding that this outcome was relatively obvious. For example, a lot more people claim to have been sure about the inevitability of who would win the Super Bowl the day after the game than they were the day before.

What explains hindsight bias? We are very poor at recalling the way an uncertain event appeared before we realize the actual results of the event, but we can be exceptionally talented at overestimating what we actually knew beforehand as we reconstruct the past. Just listen to a call-in sports show after a big game, and hindsight bias will be on full display.

We seek out or prefer information and opinions that we believe will confirm our own judgment. We want to be confirmed, so we pay more attention to information that we think supports us, and we ignore or diminish the significance of information to the contrary.

Halo effect concerns the preferential attitude that we have toward certain individuals or organizations. Because we are impressed with their knowledge or expertise in a certain area or areas, we unconsciously begin to give their opinions special credence in other areas as well. This would, for example, be exhibited when sports stars express their political opinions and the public gives strong weight to what they say. There is no logical reason to think that they have sound political opinions just because they have great skill in the realm of sports.

Overconfident bias is particularly easy to understand. It basically amounts to the idea that an individual decision maker trusts his own judgment (usually his intuition) and allows that judgment to override evidence to the contrary. His opinion counts more strongly to him than that of experts who are more knowledgeable and often more than factual data that contradicts his views. From an organizational standpoint, as managers and employees become more knowledgeable about an issue, the less likely they are to display overconfidence. And overconfidence is most likely to arise when employees are considering issues outside of their area of expertise.

Some decision makers prefer to avoid change and maintain the status quo. This desire, perhaps unrecognized, often leads them to favor ideas that do not lead to significant changes. Evidence and ideas that support change are neglected as a result.

Pro-innovative bias is the opposite of the status-quo bias. Rather than prefer things to stay the same, the innovation bias gives preference to any new and innovative idea simply because it represents something new. The feeling is that new ideas must be better than old ones. Even if no objective evidence supports the new idea as useful and helpful, it is still attractive just by virtue of being new.

Here is an explanatory video that will help you understand some of these biases along with others:

An interactive or media element has been excluded from this version of the text. You can view it online here: http://pb.libretexts.org/pom/?p=180

You can view the transcript for “Common Biases and Judgement Errors in Decision Making Organizational Behavior (by Jennifer Lombardo)” here (opens in new window).