Neoclassical economists believe we should focus attention on the long run (e.g. economic growth) and that the short run will take care of itself. We know that economic growth, defined as the percentage change in real GDP over time, comes about through increases in the quantity and quality of labor, physical capital, and technology—all set in an economic environment where firms and individuals can react to the incentives provided by well-functioning markets and flexible prices. In this section, we will examine how fiscal policy can affect these variables.

Government borrowing can reduce the financial capital available for private firms to invest in physical capital. However, government spending can also encourage certain elements of long-term growth, such as spending on roads or water systems, on education, or on research and development that creates new technology. 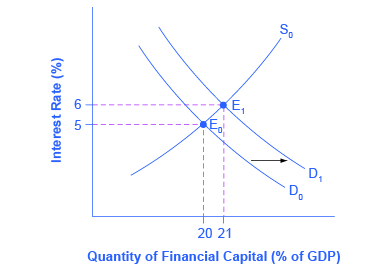 Higher interest rates tend to reduce private investment in physical capital. The new factory that made sense when a company could borrow the necessary funding at 5%, no longer makes sense at an interest rate of 6%.

A key question then is how much crowding out occurs. The answer is it depends. Crowding out seems to occur less during recession since banks have savings to lend, but limited borrowers.

The degree of crowding out also depends on the amount of private saving and inflows of foreign financial investment. In the mid-1980s, for example, government budget deficits increased substantially without a corresponding drop off in private investment. In 2009, nonresidential private fixed investment dropped by $300 billion from its previous level of $1,941 billion in 2008, primarily because, during a recession, firms lack both the funds and the incentive to invest. Investment growth between 2009 and 2014 averaged approximately 5.9% to $2,210.5 billion—only slightly above its 2008 level, according to the Bureau of Economic Analysis. During that same period, interest rates dropped from 3.94% to less than a quarter percent as the Federal Reserve took dramatic action to prevent a depression by increasing the money supply through lowering short-term interest rates. The crowding out of private investment due to government borrowing to finance expenditures appears to have been suspended during the Great Recession. However, as the economy improves and interest rates rise, government borrowing may potentially create pressure on interest rates.

Effects of Crowding Out

How does crowding out affect the path of the economy? If the purpose of expansionary fiscal policy was to stimulate GDP and employment (i.e. a Keynesian stimulus for the short-term), the extent to which crowding out occurs will limit the stimulus. If say a $100 billion increase in government spending results in a $50 billion decrease in private investment spending, then the net increase to total expenditure is $50 billion instead of $100 billion. Crowding out reduces the effects of a fiscal stimulus.

However, the long run effects, emphasized by neoclassical economists, are more serious. Recall that economic growth is caused by investment in physical capital. If crowding out causes a reduction in private investment, it also leads to a reduction in economic growth over the long term. This is another reason why neoclassicals favor business tax cuts over government spending increases since business tax cuts tend to stimulate private investment.

In 2014, the U.S. federal government budget for Fiscal Year 2014 shows that the United States spent about $92 billion on transportation, including highways, mass transit, and airports. Table 1 shows the federal government’s total outlay for 2014 for major public physical capital investment in the United States. We have omitted physical capital related to the military or to residences where people live from this table, because the focus here is on public investments that have a direct effect on raising output in the private sector.

In most countries, the government plays a large role in society’s investment in human capital through the education system, both K12 and higher education. Education conveys positive externalities–while individuals gain from an education, so does society at large. Educated citizens are more thoughtful voters. A highly educated and skilled workforce contributes to a higher rate of economic growth. For the low-income nations of the world, additional investment in human capital seems likely to increase productivity and growth. Of course, spending more dollars on education is no guarantee that students will learn more. Despite significant increases over the last several decades in U.S. educational spending per pupil, standardized test scores like the SAT have failed to increase significantly. Still, in this day and age it’s hard to argue that education isn’t important.

Other government programs seek to increase human capital either before or after the K–12 education system. Programs for early childhood education, like the federal Head Start program, are directed at families where the parents may have limited educational and financial resources. Government also offers substantial support for universities and colleges. For example, in the United States about 60% of students take at least a few college or university classes beyond the high school level. In Germany and Japan, about half of all students take classes beyond the comparable high school level. In the countries of Latin America, only about one student in four takes classes beyond the high school level, and in the nations of sub-Saharan Africa, only about one student in 20.

Not all spending on educational human capital needs to happen through the government: many college students in the United States pay a substantial share of the cost of their education. If low-income countries of the world are going to experience a widespread increase in their education levels for grade-school children, government spending seems likely to play a substantial role. For the U.S. economy, and for other high-income countries, the primary focus at this time is more on how to get a bigger return from existing spending on education and how to improve the performance of the average high school graduate, rather than dramatic increases in education spending.

Research and development (R&D) efforts are the lifeblood of new technology. According to the National Science Foundation, federal outlays for research, development, and physical plant improvements to various governmental agencies have remained at an average of 8.8% of GDP. About one-fifth of U.S. R&D spending goes to defense and space-oriented research. Although defense-oriented R&D spending may sometimes produce consumer-oriented spinoffs, R&D that is aimed at producing new weapons is less likely to benefit the civilian economy than direct civilian R&D spending.

Fiscal policy can encourage R&D using either direct spending or tax policy. Government could spend more on the R&D that it carries out in government laboratories, as well as expanding federal R&D grants to universities and colleges, nonprofit organizations, and the private sector. By 2014, the federal share of R&D outlays totaled $135.5 billion, or about 4% of the federal government’s total budget outlays, according to data from the National Science Foundation. Fiscal policy can also support R&D through tax incentives, which allow firms to reduce their tax bill as they increase spending on research and development.