The world population has been growing continuously since the 14th century, but the growth rate has been decreasing in the last few decades.

The Demographic Transition: This model illustrates the demographic transition, as birth and death rates rise and fall but eventually reach equilibrium.

Overpopulation at a National Level

Overpopulation indicates a scenario in which the population of a living species exceeds the carrying capacity of its ecological niche. Overpopulation is not a function of the number or density of the individuals, but rather the number of individuals compared to the resources they need to survive. In other words, it is a ratio—population:resources. Resources important in measures of overpopulation include clean water, food, shelter, healthcare, etc.

Most of the population growth in the world today comes from developing countries, most notably African countries, where birth rates have remained high. Many of these countries are struggling to provide food and resources necessary to support a young, growing population. Overpopulation can result in a variety of problems, including famine, shortage of natural resources, spread of communicable disease due to dense populations, and conflict over scarce resources.

Underpopulation at a National Level

Once countries pass through the demographic transition, some experience fertility rate decreases so substantial that they fall well below replacement level—the birth rate needed to maintain a stable population—and their populations begin to shrink. About half the world population lives in nations with sub-replacement fertility. A new fear for many governments, particularly those in countries with very low fertility rates, is underpopulation—a state in which the declining population reduces the GDP and economic growth of the country, as population growth is often a driving force of economic expansion. To combat extremely low fertility rates, some of these governments have introduced pro-family policies, such as payments to parents for having children and extensive parental leave for parents.

Debates about Overpopulation on a Global Level

Despite concerns of underpopulation in individual countries, overpopulation is still the most pressing concern for those who track global population trends. Presently, the world’s population grows by approximately 80 million annually. The United Nations projects that the world population will stabilize in 2075 at nine billion due to declining fertility rates.

Concerns about overpopulation are not new; early in the 19th century, Thomas Malthus argued in “An Essay on the Principle of Population” that, if left unrestricted, human populations would continue to grow until they would become too large to be supported by the food grown on available agricultural land. Once the population exceeded the planet’s carrying capacity, the population would be restrained through mass famine and starvation. Malthus argued for population control—policies intended to lower the birth rate—to avoid this happening. His arguments are widely known as Malthusianism, and present-day proponents of this theory are called Neo-Malthusians. Critics of Malthus point to the fact that the widespread famines he predicted have not occurred, even though the world population has continued to expand.

Some approach overpopulation with a laissez-faire attitude, arguing that if the earth’s ecosystem becomes overtaxed, it will naturally regulate itself. In this mode of thought, disease or starvation are natural means of decreasing the population. Objections to this argument include that a huge number of plant and animal species would go extinct; terrible pollution would arise in some areas, and it would be difficult to abate; and moral problems would be created—great suffering for the people who do not have access to resources.

Others argue that economic development is the best way to reduce population growth because economic development can spur demographic transitions that lead to reduced fertility rates. Where women’s status has improved, for example, there has generally been a drastic reduction in the birth rate, resulting in more sustainable growth levels. 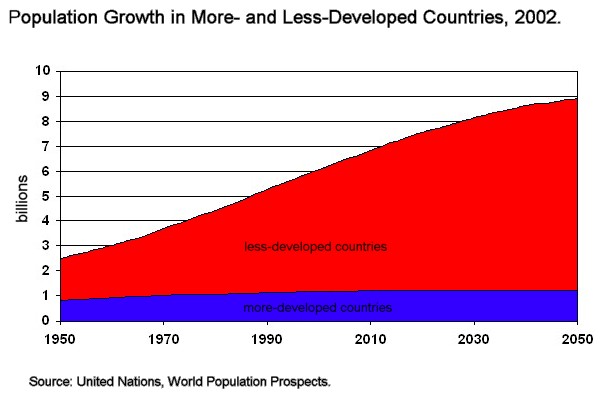 Population Growth According to Development: The majority of world population growth today is occurring in less developed countries.