Those with weak support structures are more vulnerable to hunger and starvation than those with strong family networks.

“Hunger” is the most commonly used term to describe the social condition of people who frequently experience the physical sensation of desiring food. “Malnutrition” is a general term for conditions caused by improper diet or nutrition, and can occur in conjunction with under- or overconsumption of calories. Undernutrition is the result of chronic underconsumption of food.

Two terms frequently associated with hunger are “famine” and “starvation. ” Famine is the widespread scarcity of food, and it is usually accompanied by regional malnutrition, starvation, epidemic, and increased mortality. Starvation describes a state of exhaustion of the body caused by lack of food and may be fatal.

While statistics vary based on measurements used, it is generally agreed that the number of malnourished or undernourished people in the world was around 1 billion people in 2010, about a sixth of the world’s total population. Hunger is particularly devastating for children. Approximately six million children die of hunger every year. 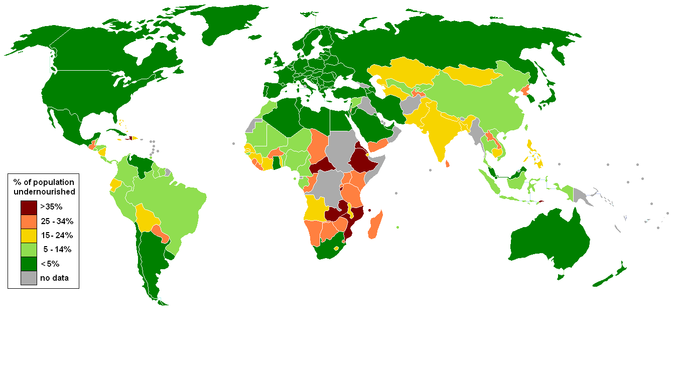 Hunger: This map shows the percentage of a country’s population that is undernourished.

Attempts to understand why hunger exists are not new. Thomas Malthus, in the six editions of his book, An Essay on the Principle of Population, published from 1798 to 1826, argued that the explosive population growth happening in his time could not continue indefinitely. He claimed population growth would eventually be checked by famine and disease, because the earth’s ability to produce food would not be able to keep up with the size of the population. His dire predictions are widely known as “Malthusianism. ”

Current population growth, which is still on the rise, seems to disprove Malthus’ theory, hunger problems notwithstanding. In fact, many believe that the earth is more than capable of sustaining the current world population. The Food and Agricultural Organization of the United Nations purports that the world already produces enough food to feed everyone–over 6 billion people–and could feed double that number of people. Amartya Sen won his 1998 Nobel Prize in part for his work in demonstrating that hunger in modern times is not typically the product of a lack of food, but rather problems in food distribution networks and governmental policies in the developing world.

Today, there is a wide range of opinions as to why the hunger problem is so persistent. Some organizations raise the issue of food sovereignty and claim that every country on earth (with the possible minor exceptions of some city-states) has sufficient agricultural capacity to feed its own people, but that the free trade economic order prevents this from happening. These advocates argue that free trade policies transfer economic decision-making power into the hands of multilateral organizations, such as the World Bank and International Monetary Fund and transnational corporations, so that local people are unable to determine what is done with food that is locally produced.

At the other end of the spectrum, transnational organizations like the World Bank claim to be part of the solution to hunger, maintaining that the best way for countries to succeed in breaking the cycle of poverty and hunger is to build export-led economies that will give them the financial means to buy foodstuffs on the world market.

The Role of the Family in Hunger Problems

The family plays an important role in understanding patterns of hunger. Those who have a weak or non-existent family support structure are more likely than those with strong family networks to go hungry. Children and seniors are the most vulnerable to going hungry for lack of familial support.

Children, since they are less able to provide for themselves than adults, are more likely to go hungry if they live in unstable families or on the streets. Malnutrition and hunger-related diseases cause (at least partially) 60% of children’s deaths in the developing world.

Seniors are another at-risk population for hunger. According to one 2007 study, over 11.4% of seniors in the United States experience some form of food insecurity. The most at-risk segments of the senior population include those who lack a strong family structure (i.e., those who were never married), live alone, or live with a grandchild (but with no adult child present).