As flows of people, money, products, and information increasingly transcend national boundaries, it becomes important to study health trends not just within nations, but from a worldwide perspective. World (or global) health as a research field emerged out of this necessity and lies at the intersection of the medical and social science disciplines, including the fields of demography (the study of population trends), economics, epidemiology (the study of the distribution of health events in a population), political economy, and sociology.

Historically, global health studies rose to prominence in the 1940s, after World War II reconfigured geopolitical alignments and international relations. In 1948, the member states of the newly formed United Nations gathered together to create the World Health Organization (WHO). The organization began with a focus on prevention and eradication of contagious diseases, such as cholera, smallpox, and malaria. WHO initiatives have evolved and expanded throughout the years, however. For example immunization initiatives were launched in the 1970’s, HIV/AIDs initiatives in the 1980’s, and violence awareness initiatives in the 2000’s. While the WHO is the key international agency for monitoring and promoting global health, many other groups also participate.

The main diseases and health conditions prioritized by global health initiatives are sometimes classified under the terms diseases of affluence and diseases of poverty, although the impacts of globalization are increasingly blurring any such distinction.

Diseases of affluence refer to physical health conditions for which personal lifestyles (such as lack of exercise or eating a high-fat diet) and societal conditions (such as stressful work arrangements or environmental pollution) associated with economic development are believed to be an important risk factor. Examples of diseases of affluence include Type II diabetes, asthma, coronary heart disease, obesity, hypertension, cancer, and alcoholism. Depression and other mental health conditions may also be included as conditions associated with increased social isolation and lower levels of psychological well being observed in many developed countries. Many of these conditions are interrelated. For example, obesity can be linked to many other illnesses and deaths in high-income nations.

So-called diseases of affluence are predicted to become more prevalent in developing countries, as diseases of poverty decline, longevity increases, and lifestyles change. In 2008, nearly 80% of deaths due to non-communicable diseases, including heart disease, strokes, chronic lung diseases, cancers, and diabetes, occurred in low- and middle-income countries.

In contrast, the diseases of poverty tend to consist largely of infectious diseases, often related to poor sanitation, low vaccination coverage, inadequate public health services, and weak enforcement of environmental health and safety regulations. At the global level, the three primary poverty-related diseases are AIDS, malaria, and tuberculosis. Developing countries account for 95% of the global AIDS prevalence and 98% of active tuberculosis infections. Furthermore, 90% of malaria deaths occur in sub-Saharan Africa. Together, these three diseases account for 10% of global mortality.

Treatable childhood diseases are another set of illnesses that are seen at disproportionately high rates in poor countries, despite the existence of cures for the diseases for decades. These illnesses include measles, pertussis, diarrheal diseases, pneumonia, and polio. Among children under the age of 5 in the developing world, malnutrition, which results from either a lack of food or an inadequately diversified diet, contributes to 53% of deaths associated with infectious diseases. Malnutrition impairs the immune system, thereby increasing the frequency, severity, and duration of childhood illnesses. Micronutrient deficiencies also compromise intellectual potential, growth, development, and adult productivity. 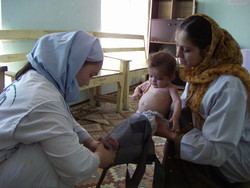 As the above discussion of diseases of poverty and diseases of affluence reveals, health trends are closely related to social, political, and economic patterns. Thus, health interventions must likewise address not just diseases themselves, but the structural factors which prevent certain groups from accessing adequate healthcare or from having adequate information with which to practice healthy habits and prevent disease. These interventions could include addressing issues of structural inequality, that is, the highly unequal distribution of global wealth that results in conditions of extreme poverty which are difficult if not impossible to escape. It could also mean addressing the global economic patterns which result in healthcare workers having more incentive to work in developed countries and leaving developing countries short staffed. Finally, health interventions could advance by considering the relationship of national and international politics to the establishment of adequate education and healthcare systems.