Judaism is the religion, philosophy, and way of life of the Jewish people. It is a monotheistic religion originating in the Hebrew Bible (also known as the Tanakh) and explored in later texts such as the Talmud. Judaism is considered by religious Jews to be the expression of the covenantal relationship God established with the Children of Israel. Rabbinic Judaism holds that God revealed his laws and commandments to Moses on Mount Sinai in the form of both the Written and Oral Torah. The sacred texts of Judaism tends to overlap with many of the stories from Christianity and Islam. The Tanakh consists of the same books as the Christian Old Testament, with minor changes in the order of stories.

Judaism in the United States

American Jews, also known as Jewish Americans, are American citizens of the Jewish faith or Jewish ethnicity. The Jewish community in the United States is composed predominantly of Ashkenazi Jews who emigrated from Central and Eastern Europe, and their U.S.-born descendants. Minorities from all Jewish ethnic divisions are also represented, including Sephardi Jews, Mizrahi Jews, and a number of converts. The American Jewish community manifests a wide range of Jewish cultural traditions, as well as encompassing the full spectrum of Jewish religious observance.

Depending on religious definitions and varying population data, the United States is home to the largest or second largest (after Israel) Jewish community in the world. The population of American adherents of Judaism was estimated to be approximately 5,128,000 or 1.7% of the total population in 2007 (301,621,000); including those who identify themselves culturally as Jewish (but not necessarily religiously), this population was estimated at 6,489,000 (2.2%) as of 2008. As a contrast, Israel’s Central Bureau of Statistics estimated the Israeli Jewish population was 5,664,000 in 2009 (75.4% of the total population).

Jews have been present in what is today the United States of America as early as the 17th century. Large scale Jewish immigration, however, did not begin until the nineteenth century, when, by mid-century, many secular Ashkenazi Jews from Germany arrived in the United States, primarily becoming merchants and shop-owners. There were approximately 250,000 Jews in the United States by 1880, many of them being the educated, and largely secular, German Jews, although a minority population of the older Sephardic Jewish families remained influential.

Jewish immigration to the United States increased dramatically in the early 1880s, as a result of persecution and economic difficulties in parts of Eastern Europe. Most of these new immigrants also were Yiddish-speaking Ashkenazi Jews, though most came from the poor rural populations of the Russian Empire and the Pale of Settlement, located in modern-day Poland, Lithuania, Belarus, Ukraine and Moldova. During the same period, a great number of Ashkenazi Jews arrived also from Galicia, at that time the most impoverished region of Austro-Hungarian Empire with heavy Jewish urban population, driven out mainly by economic reasons. Most settled in the New York metropolitan area, establishing what became one of the world’s major concentrations of Jewish population.

Though Jewish views on evolution are varied, most schools of Jewish thought have reconciled Judaism with evolution. A 2009 Harris Poll showed American Jews as the religious group most accepting of evolution, with 80% believing in evolution, compared to 51% for Catholics, 32% for Protestants, and 16% of Born-again Christians. They were also less likely to believe in supernatural phenomena such as miracles, angels, or heaven. 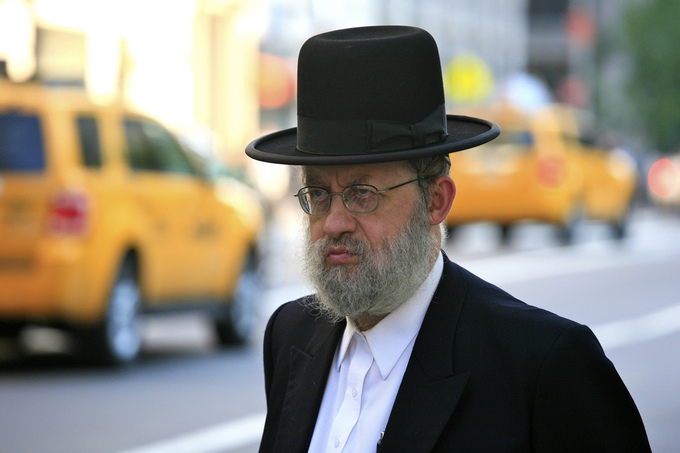 A Haredi Jew in New York CIty: The Haredi Jews are the most conservative of Orthodox Jews.