Religion is a collection of cultural systems, belief systems, and worldviews that relate humanity to spirituality and to moral values.

Religion is a collection of cultural systems, belief systems, and worldviews that relate humanity to spirituality and, sometimes, to moral values. Many religions have narratives, symbols, traditions, and sacred histories that are intended to give meaning to life or to explain the origin of life or the universe.

Many languages have words that can be translated as “religion,” but they may use them in a very different way, and some have no word for religion at all. For example, the Sanskrit word “dharma,” sometimes translated as “religion,” also means law. Throughout classical South Asia, the study of law consisted of concepts such as penance through piety and ceremonial and practical traditions. Medieval Japan at first had a similar union between “imperial law” and universal or “Buddha law,” but these later became independent sources of power.

The typical dictionary definition of religion refers to a “belief in, or the worship of, a god or gods” or the “service and worship of God or the supernatural. ” However, many writers and scholars have noted that this basic “belief in god” definition fails to capture the diversity of religious thought and experience. Edward Burnett Tylor defined religion as simply “the belief in spiritual beings. ” He argued, in 1871, that narrowing the definition to mean the belief in a supreme deity or judgment after death would exclude many peoples from the category of religious and thus “has the fault of identifying religion rather with particular developments than with the deeper motive which underlies them. ” He also argued that the belief in spiritual beings exists in all known societies.

The sociologist Emile Durkheim, in his seminal book The Elementary Forms of the Religious Life, defined religion as a “unified system of beliefs and practices relative to sacred things. ” By sacred things he meant things “set apart and forbidden — beliefs and practices which unite into one single moral community called a Church, all those who adhere to them. ” Sacred things are not, however, limited to gods or spirits. On the contrary, a sacred thing can be “a rock, a tree, a spring, a pebble, a piece of wood, a house, in a word, anything can be sacred. ” Religious beliefs, myths, dogmas, and legends are the representations that express the nature of these sacred things and the virtues and powers that are attributed to them.

The development of religion has taken different forms in different cultures. Some religions place an emphasis on belief while others emphasize practice. Some religions focus on the subjective experience of the religious individual while others consider the activities of the religious community to be most important. Some religions claim to be universal, believing their laws and cosmology to be binding for everyone, while others are intended to be practiced only by a closely-defined or localized group. In many places religion has been associated with public institutions such as education, hospitals, the family, government, and political hierarchy.

One modern academic theory of religion, social constructionism, says that religion is a modern concept that has been defined relative to the Abrahamic religions and that thus, religion as a concept has been applied inappropriately to non-Western cultures that are not based upon such systems. 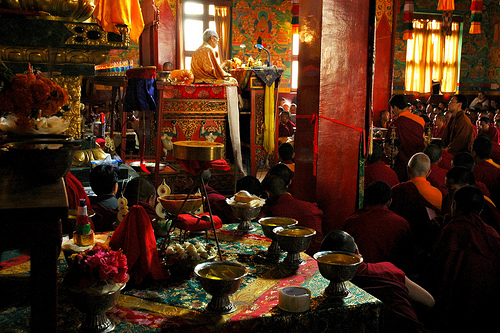