Article 3 of the Uniform Commercial Code (UCC) covers commercial paper but explicitly excludes money, documents of title, and investment securities. Documents of title include bills of lading and warehouse receipts and are governed by Article 7 of the UCC. Investment securities are covered by Article 8. Instruments that fall within the scope of Article 3 may also be subject to Article 4 (bank deposits and collections), Article 8 (securities), and Article 9 (secured transactions). If so, the rules of these other articles supersede the provisions of Article 3 to the extent of conflict. Article 3 is a set of general provisions on negotiability; the other articles deal more narrowly with specific transactions or instruments.

There are four types of commercial paper: drafts, checks, notes, and certificates of deposit.

A draft is an unconditional written order by one person (the drawer) directing another person (the drawee) to pay a certain sum of money on demand or at a definite time to a named third person (the payee) or to bearer. The draft is one of the two basic types of commercial paper; the other is the note. As indicated by its definition, the draft is a three-party transaction.

Parties to a Draft

The drawer is one who directs a person or an entity, usually a bank, to pay a sum of money stated in an instrument—for example, a person who makes a draft or writes a check. The drawer prepares a document (a form, usually)—the draft—ordering the drawee to remit a stated sum of money to the payee. The drawee is the person or entity that a draft is directed to and that is ordered to pay the amount stated on it. The most common drawee is a bank. The drawer, drawee, and payee need not be different people; the same person may have different capacities in a single transaction. For example, a drawer (the person asking that payment be made) may also be the payee (the person to whom the payment is to be made). A drawee who signs the draft becomes an acceptor: the drawee pledges to honor the draft as written. To accept, the drawee need only sign her name on the draft, usually vertically on the face, but anywhere will do. Words such as “accepted” or “good” are unnecessary. However, a drawee who indicates that she might refuse to pay will not be held to have accepted. Thus in the archetypal case, the court held that a drawee who signed his name and appended the words “Kiss my foot” did not accept the draft. Norton v. Knapp, 19 N.W. 867 (IA 1884).

The drawer directs the funds to be drawn from—pulled from—the drawee, and the drawee pays the person entitled to payment as directed.

Drafts can be divided into two broad subcategories: sight drafts and time drafts.

A sight draft calls for payment “on sight,” that is, when presented. Recall from Section 19.1 "Introduction to Commercial Paper" that Lorna Love wished to buy tennis rackets from Rackets, Inc. Suppose Love had the money to pay but did not want to do so before delivery. Rackets, on the other hand, did not want to ship before Love paid. The solution: a sight draft, drawn on Love, to which would be attached an order bill of lading that Rackets received from the trucker when it shipped the rackets. The sight draft and bill of lading go to a bank in Love’s city. When the tennis rackets arrive, the carrier notifies the bank, which presents the draft to Love for payment. When she has done so, the bank gives Love the bill of lading, entitling her to receive the shipment. The bank forwards the payment to Rackets’ bank, which credits Rackets’ account with the purchase amount.

A time draft, not surprisingly, calls for payment on a date specified in the draft. Suppose that Love will not have sufficient cash to pay until she has sold the rackets but that Rackets needs to be paid immediately. The solution: a common form of time draft known as a trade acceptance. Rackets, the seller, draws a draft on Love, who thus becomes a drawee. The draft orders Love to pay the purchase price to the order of Rackets, as payee, on a fixed date. Rackets presents the draft to Love, who accepts it by signing her name. Rackets then can indorse the draft (by signing it) and sell it, at a discount, to its bank or some other financial institution. Rackets thus gets its money right away; the bank may collect from Love on the date specified. See the example of a time draft in Figure 19.3 "A Time Draft". 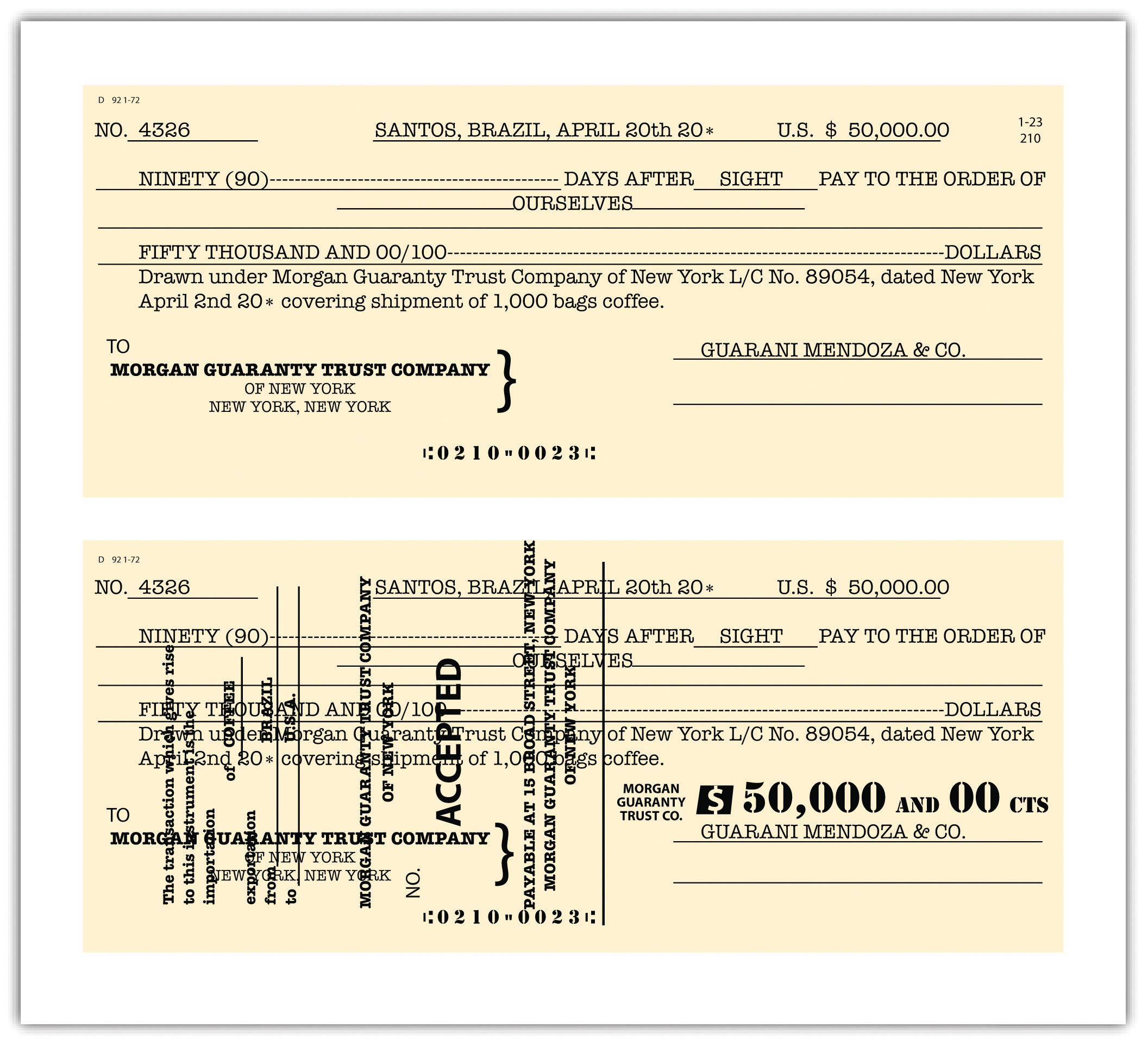 A widely used draft in international trade is the banker’s acceptance. It is a short-term credit investment created by a nonfinancial firm and guaranteed by a bank. This instrument is used when an exporter agrees to extend credit to an importer.

Assume Love, the importer, is in New York; Rackets, the exporter, is in Taiwan. Rackets is willing to permit Love to pay ninety days after shipment. Love makes a deal with her New York bank to issue Rackets’ bank in Taiwan a letter of credit. This tells the seller’s bank that the buyer’s bank is willing to accept a draft drawn on the buyer in accordance with terms spelled out in the letter of credit. Love’s bank may insist on a security interest in the tennis rackets, or it may conclude that Love is creditworthy. On receipt of the letter of credit, Rackets presents its bank in Taiwan with a draft drawn on Love’s bank. That bank antes up the purchase amount (less its fees and interest), paying Rackets directly. It then forwards the draft, bill of lading, and other papers to a correspondent bank in New York, which in turn presents it to Love’s bank. If the papers are in order, Love’s bank will “accept” the draft (sign it). The signed draft is the banker’s acceptance (see Figure 19.3 "A Time Draft"). It is returned to the bank in Taiwan, which can then discount the banker’s acceptance if it wishes payment immediately or else wait the ninety days to present it to the New York bank for payment. After remitting to the Taiwanese bank, the New York bank then demands payment from Love.

A second type of commercial paper is the common bank check, a special form of draft. Section 3-104(2)(b) of the UCC defines a check as “a draft drawn on a bank and payable on demand.” Postdating a check (putting in a future date) does not invalidate it or change its character as payable on demand. Postdating simply changes the first time at which the payee may demand payment. Checks are, of course, usually written on paper forms, but a check can be written on anything—a door, a shirt, a rock—though certainly the would-be holder is not obligated to accept it.

A note—often called a promissory note—is a written promise to pay a specified sum of money on demand or at a definite time. There are two parties to a note: the maker (promisor), and the payee (promisee). For an example of a promissory note, see Figure 19.4 "A Promissory Note". The maker might execute a promissory note in return for a money loan from a bank or other financial institution or in return for the opportunity to make a purchase on credit.

A fourth type of commercial paper is the certificate of deposit, commonly called a CD. The CD is a written acknowledgment by a bank that it has received money and agrees to repay it at a time specified in the certificate. The first negotiable CD was issued in 1961 by First National City Bank of New York (now Citibank); it was designed to compete for corporate cash that companies were investing in Treasury notes and other funds. Because CDs are negotiable, they can be traded easily if the holder wants cash, though their price fluctuates with the market.

Other Parties to Commercial Paper

In addition to makers, drawees, and payees, there are five other capacities in which one can deal with commercial paper.

The indorser (also spelled endorser) is one who transfers ownership of a negotiable instrument by signing it. A depositor indorses a check when presenting it for deposit by signing it on the back. The bank deposits its own funds, in the amount of the check, to the depositor’s account. By indorsing it, the depositor transfers ownership of the check to the bank. The depositor’s bank then can present it to the drawer’s bank for repayment from the drawer’s funds. The indorsee is the one to whom a draft or note is indorsed. When a check is deposited in a bank, the bank is the indorsee.

A holder is “a person in possession of a negotiable that is payable either to bearer, or to an identified person that is the person in possession.”Uniform Commercial Code, Section 1-201(21). Holder is thus a generic term that embraces several of the specific types of parties already mentioned. An indorsee and a drawee can be holders. But a holder can also be someone unnamed whom the original parties did not contemplate by name—for example, the holder of a bearer note.

Holder in Due Course

A holder in due course is a special type of holder who, if certain requirements are met, acquires rights beyond those possessed by the transferor (we alluded to this in describing the significance of Lorna Love’s making of a negotiable—as opposed to a nonnegotiable—instrument). We discuss the requirements for a holder in due course in Chapter 21 "Holder in Due Course and Defenses".

The modern law of commercial paper is, in general, covered by UCC Article 3. The two basic types of commercial paper are drafts and notes. The note is a two-party instrument whereby one person (maker) promises to pay money to a second person (payee). The draft is a three-party instrument whereby one person (drawer) directs a second (drawee) to pay money to the third (payee). Drafts may be sight drafts, payable on sight, or they may be time drafts, payable at a date specified on the draft. Checks are drafts drawn on banks. Other parties include indorser and indorsee, holder, holder in due course, and accommodation party.