There are three types of authority: express, implied, and apparent (see Figure 10.1 "Types of Authority"). We will consider each in turn.

The strongest form of authority is that which is expressly granted, often in written form. The principal consents to the agent’s actions, and the third party may then rely on the document attesting to the agent’s authority to deal on behalf of the principal. One common form of express authority is the standard signature card on file with banks allowing corporate agents to write checks on the company’s credit. The principal bears the risk of any wrongful action of his agent, as demonstrated in Allen A. Funt Productions, Inc. v. Chemical Bank. Allen A. Funt Productions, Inc. v. Chemical Bank, 405 N.Y.S.2d 94 (1978). Allen A. Funt submitted to his bank through his production company various certificates permitting his accountant to use the company’s checking accounts. Allen Funt (1914–99) was an American television producer, director, and writer, best known as the creator and host of Candid Camera from the 1940s to 1980s, which was broadcast as either a regular show or a series of specials. Its most notable run was from 1960 to 1967 on CBS. In fact, for several years the accountant embezzled money from the company by writing checks to himself and depositing them in his own account. The company sued its bank, charging it with negligence, apparently for failing to monitor the amount of money taken by the accountant. But the court dismissed the negligence complaint, citing a state statute based on the common-law agency principle that a third party is entitled to rely on the express authorization given to an agent; in this case, the accountant drew checks on the account within the monetary limits contained in the signature cards on file with the bank. Letters of introduction and work orders are other types of express authority. 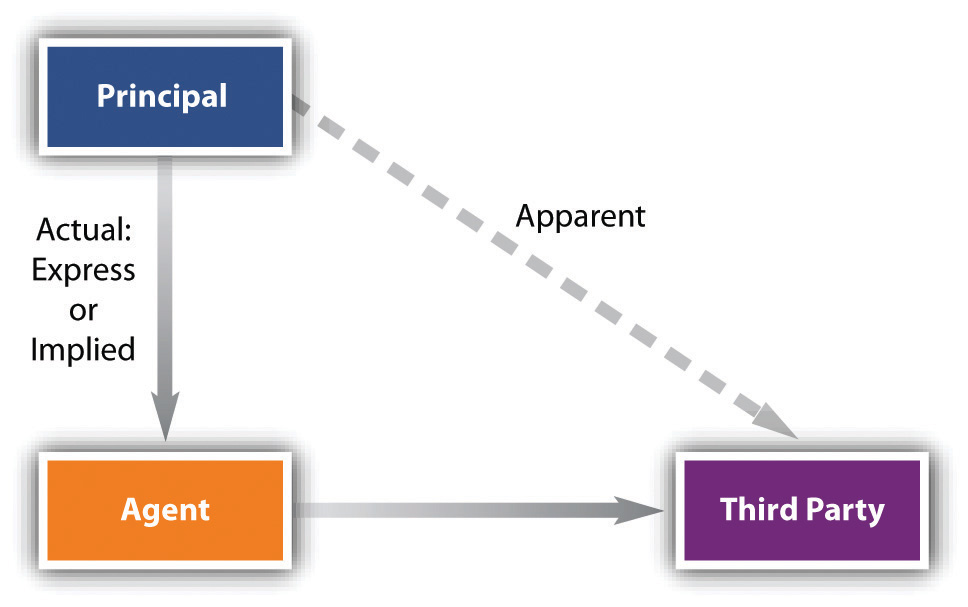 Apparent authority can arise from prior business transactions. On July 10, Meggs sold to Buyer his business, the right to use the trade name Rose City Sheet Metal Works, and a list of suppliers he had used. Three days later, Buyer began ordering supplies from Central Supply Company, which was on Meggs’s list but with which Meggs had last dealt four years before. On September 3, Central received a letter from Meggs notifying it of Meggs’s sale of the business to Buyer. Buyer failed to pay Central, which sued Meggs. The court held that Rose City Sheet Metal Works had apparent authority to buy on Meggs’s credit; Meggs was liable for supplies purchased between July 10 and September 3.Meggs v. Central Supply Co., 307 N.E.2d 288 (Ind. App. 1974). In such cases, and in cases involving the firing of a general manager, actual notice should be given promptly to all customers. See the discussion of Kanavos v. Hancock Bank & Trust Company in Section 10.4.1 "Implied Authority".