1. What are the traditional forms of organizational structure?

The key functions that managers perform include planning, organizing, leading, and controlling. This module focuses specifically on the organizing function. Organizing involves coordinating and allocating a firm’s resources so that the firm can carry out its plans and achieve its goals. This organizing, or structuring, process is accomplished by:

The result of the organizing process is a formal structure within an organization. An organization is the order and design of relationships within a company or firm. It consists of two or more people working together with a common objective and clarity of purpose. Formal organizations also have well-defined lines of authority, channels for information flow, and means of control. Human, material, financial, and information resources are deliberately connected to form the business organization. Some connections are long-lasting, such as the links among people in the finance or marketing department. Others can be changed at almost any time—for example, when a committee is formed to study a problem.

Every organization has some kind of underlying structure. Typically, organizations base their frameworks on traditional, contemporary, or team-based approaches. Traditional structures are more rigid and group employees by function, products, processes, customers, or regions. Contemporary and team-based structures are more flexible and assemble employees to respond quickly to dynamic business environments. Regardless of the structural framework a company chooses to implement, all managers must first consider what kind of work needs to be done within the firm. Exhibit 7.3 Founded in 1943, Sweden retailer IKEA has grown from a small mail-order operation to a global force in home furnishings with more than 390 stores throughout Europe, North America, Africa, Australia, and Asia. Best known for its contemporary furniture designs, highly trafficked store openings, and quirky advertising, the IKEA Group consists of multiple divisions corresponding to the company’s retail, supply chain, sales, and design and manufacturing functions. What factors likely influenced the development of IKEA’s organizational structure as the company expanded over the years? (Credit: JJBers/ flickr/ Attribution 2.0 Generic (CC BY 2.0))

The process of dividing work into separate jobs and assigning tasks to workers is called division of labor. In a fast-food restaurant, for example, some employees take or fill orders, others prepare food, a few clean and maintain equipment, and at least one supervises all the others. In an auto assembly plant, some workers install rearview mirrors, while others mount bumpers on bumper brackets. The degree to which the tasks are subdivided into smaller jobs is called specialization. Employees who work at highly specialized jobs, such as assembly-line workers, perform a limited number and variety of tasks. Employees who become specialists at one task, or a small number of tasks, develop greater skill in doing that particular job. This can lead to greater efficiency and consistency in production and other work activities. However, a high degree of specialization can also result in employees who are disinterested or bored due to the lack of variety and challenge.

After a company divides the work it needs to do into specific jobs, managers then group the jobs together so that similar or associated tasks and activities can be coordinated. This grouping of people, tasks, and resources into organizational units is called departmentalization. It facilitates the planning, leading, and control processes.

An organization chart is a visual representation of the structured relationships among tasks and the people given the authority to do those tasks. In the organization chart in Exhibit 7.4, each figure represents a job, and each job includes several tasks. The sales manager, for instance, must hire salespeople, establish sales territories, motivate and train the salespeople, and control sales operations. The chart also indicates the general type of work done in each position. As Exhibit 7.5 shows, five basic types of departmentalization are commonly used in organizations: 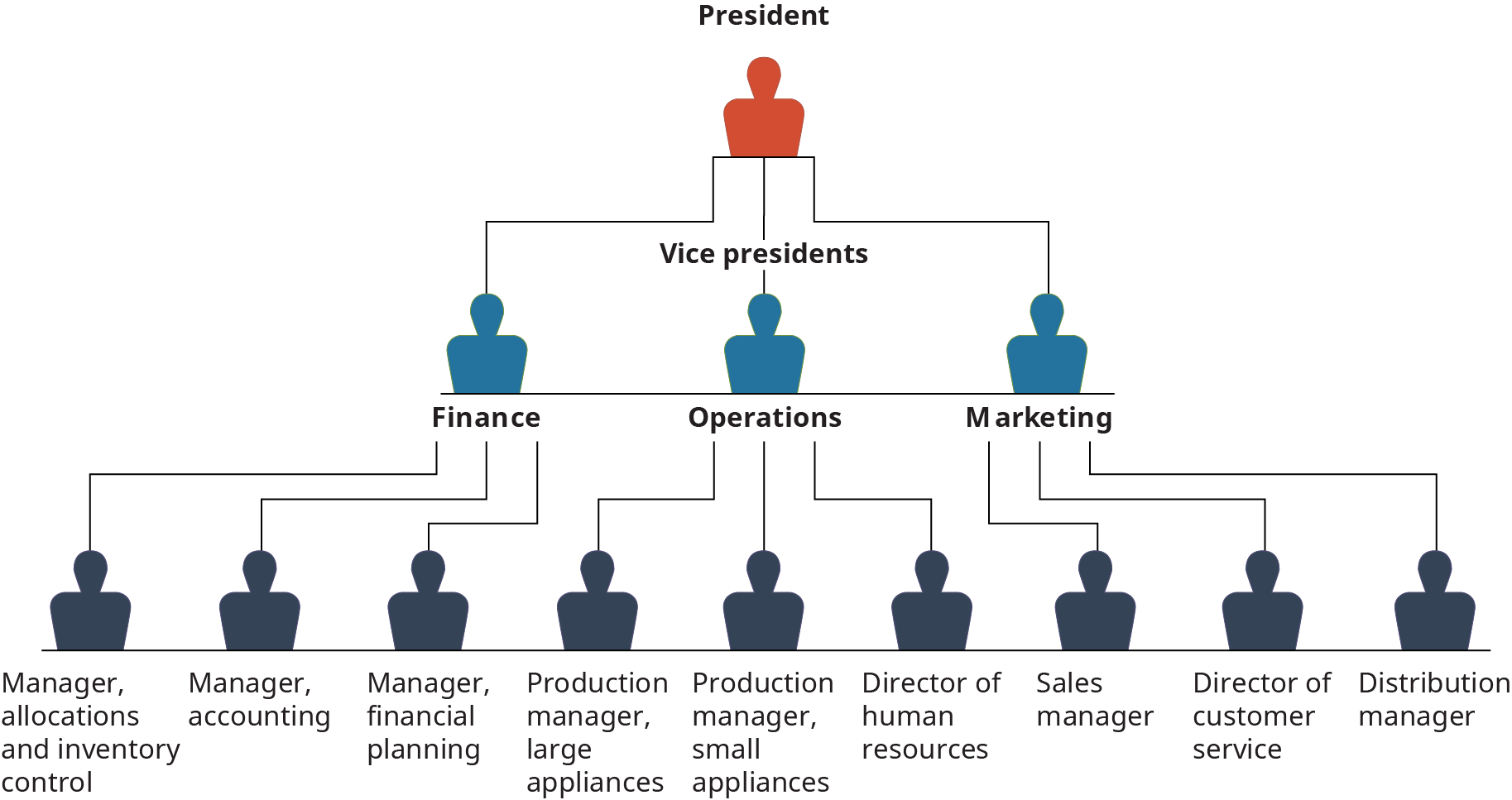 Panera’s Menu Comes CleanMaking a strategic change to a company’s overall philosophy and the way it does business affects every part of the organizational structure. And when that change pertains to sustainability and “clean food,” Panera Bread Company took on the challenge more than a decade ago and now has a menu free of man-made preservatives, sweeteners, colors, and flavors.

In 2015, Ron Shaich, company founder and CEO, announced Panera’s “no-no” list of nearly 100 ingredients, which he vowed would be eliminated or never used again in menu items. Two years later, the company announced that its menu was “100 percent clean,” but the process was not an easy one.

Panera used thousands of labor hours to review the 450 ingredients used in menu items, eventually reformulating more than 120 of them to eliminate artificial ingredients. Once the team identified the ingredients that were not “clean,” they worked with the company’s 300 vendors—and in some instances, a vendor’s supplier—to reformulate an ingredient to make it preservative-free. For example, the recipe for the company’s popular broccoli cheddar soup had to be revised 60 times to remove artificial ingredients without losing the soup’s taste and texture. According to Shaich, the trial-and-error approach was about finding the right balance of milk, cream, and emulsifiers, like Dijon mustard, to replace sodium phosphate (a no-no item) while keeping the soup’s texture creamy. Panera also created a new cheddar cheese to use in the soup and used a Dijon mustard that contained unpreserved vinegar as a substitute for the banned sodium phosphate.

Sara Burnett, Panera’s director of wellness and food policy, believes that the company’s responsibility goes beyond just serving its customers. She believes that Panera can make a difference by using its voice and purchasing power to have a positive impact on the overall food system. In addition, the company’s Herculean effort to remove artificial ingredients from its menu items also helped it take a close look at its supply chain and other processes that Panera could simplify by using better ingredients.

Panera is not yet satisfied with its commitment to clean food. The food chain recently announced its goal of sourcing 100 percent cage-free eggs for all of its U.S. Panera bakery-cafés by 2020.

People are assigned to a particular organizational unit because they perform similar or related tasks, or because they are jointly responsible for a product, client, or market. Decisions about how to departmentalize affect the way management assigns authority, distributes resources, rewards performance, and sets up lines of communication. Many large organizations use several types of departmentalization. For example, Procter & Gamble (P&G), the multibillion-dollar consumer-products company, integrates four different types of departmentalization, which the company refers to as “four pillars.” First, the Global Business Units (GBU) divide the company according to products (baby, feminine, and family care; beauty; fabric and home care; and health and grooming). Then, P&G uses a geographical approach, creating business units to market its products around the world. There are Selling and Market Operations (SMO) groups for North America; Latin America; Europe; Asia Pacific; Greater China; and India, the Middle East, and Africa. P&G’s third pillar is Global Business Services division (GBS), which also uses geographic departmentalization. GBS provides technology processes and standard data tools to enable the GBUs and SMOs to better understand the business and to serve consumers and customers better. It supports P&G business units in areas such as accounting and financial reporting, information technology, purchases, payroll and benefits administration, and facilities management. Finally, the divisions of the Corporate Functions pillar provide a safety net to all the other pillars. These divisions are comprised of functional specialties such as customer business development; external relations; human resources; legal, marketing, consumer, and market knowledge; research and development; and workplace services.6

The line organization is designed with direct, clear lines of authority and communication flowing from the top managers downward. Managers have direct control over all activities, including administrative duties. An organization chart for this type of structure would show that all positions in the firm are directly connected via an imaginary line extending from the highest position in the organization to the lowest (where production of goods and services takes place). This structure, with its simple design and broad managerial control, is often well-suited to small, entrepreneurial firms.

As an organization grows and becomes more complex, the line organization can be enhanced by adding staff positions to the design. Staff positions provide specialized advisory and support services to line managers in the line-and-staff organization, shown in Exhibit 7.6. In daily operations, individuals in line positions are directly involved in the processes used to create goods and services. Individuals in staff positions provide the administrative and support services that line employees need to achieve the firm’s goals. Line positions in organizations are typically in areas such as production, marketing, and finance. Staff positions are found in areas such as legal counseling, managerial consulting, public relations, and human resource management.